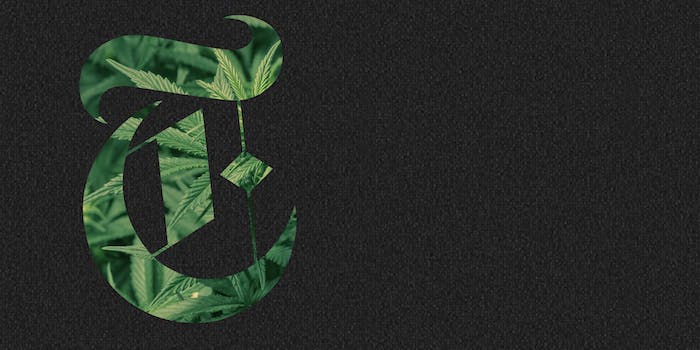 Maureen Dowd was somewhere around Denver on the edge of a plush hotel bed when the drugs began to take hold. She remembers saying something like “Is this real life?” And suddenly a “scary shudder” roared through her “body and brain.”

“I barely made it from the desk to the bed, where I lay curled up in a hallucinatory state for the next eight hours,” the Pulitzer Prize winner wrote in her most recent column. “I was panting and paranoid, sure that when the room-service waiter knocked and I didn’t answer, he’d call the police and have me arrested for being unable to handle my candy.”

This, ladies and gentlemen, is what happens when a New York Times reporter gets too damn high on legal Colorado marijuana.

“I strained to remember where I was or even what I was wearing, touching my green corduroy jeans and staring at the exposed-brick wall,” Dowd continues. “As my paranoia deepened, I became convinced that I had died and no one was telling me.”

She didn’t die, of course. But that didn’t stop the lightweight Dowd from railing against the dangers of edible reefer goodies like some type of 1930s propagandist. Nor did it stop her from getting up the next morning to conduct interviews, presumably devoid of any lingering concerns that she had baked herself into a drooling zombie.

Not that the rest of us are going to let her live this high down so easily.

“Hello, you’re reached Maureen Dowd. I’ll be out of the office until September. I’ve gone Phishing.”

Maureen Dowd has a lock on the Pulitzer for this year, folks. Just give up.

Maureen Dowd disproves the theory that my old college roommate was the worst person ever to get high with. #journalism

Next week: Maureen Dowd takes sixteen times the recommended dose of Acetaminophen; warns world of dangers in her final column.

So let this be a lesson to you, kiddies. If you’re going to go on a weed vacation to Colorado, take it easy on the pot-infused edibles. And remember: Friends don’t let friends become Maureen Dowd.

Photo by eggrole/Flickr (CC BY 2.0) | Remix by Fernando Alfonso III