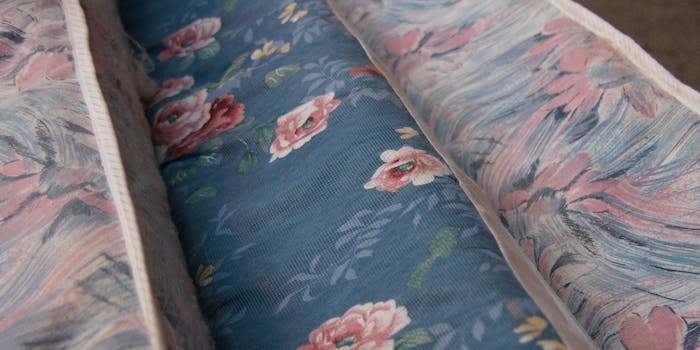 A king-sized mattress for the price of a twin? Are they nuts?

Take for instance this David Lynch-esque ad featuring a silent frog that is somehow less creepy than the actual human being on-screen.

These commercials usually have no budget and are thought up by the people who work at the store while they drink too many Applebee’s dollaritas, so no one should expect too much.

But it must have been a particularly crazy night for the people at Miracle Mattress in San Antonio, who first decided that it was a great idea to have a “Twin Towers Sale” to commemorate the anniversary of the Sept. 11 terror attacks—and then made this commercial.

(Also: A king-sized mattress for the price of a twin? Are they nuts?)

The real miracle is that multiple people decided this was going to be fine. You think at some point, during the planning, filming, editing, and posting of this video, someone would have said, “Guys, it occurs to me that some people might find this offensive, also we’re in Texas where I think preschoolers are legally required to carry firearms, maybe we should just mention how cheap the mattresses are again.”

Even if that moment did occur, the lone voice of reason was stifled by someone who, clearly, had a creative vision.

The video was taken down and an apology was issued, but one look at the comments makes it clear that people are not having it.

What’s almost as misguided as the original commercial is this tear-filled apology, where the owner can’t seem to help slipping in what sounds an awful lot like an ad for the store.

The sale is still on, by the way, but it will no longer be a “Twin Towers” sale and the company says they will donate 30 percent of the sales to the 9/11 Foundation. Maybe drop by and pick up a new bed or something. To be fair, they do have some pretty good deals on mattresses.

Update 2:56pm CT, Sept. 9: Welp, Miracle Mattress has apparently been shamed into oblivion. RIP, and never forget (to avoid making commercials like theirs).

Miracle Mattress is closing its doors due to the backlash from their 9/11 ad. pic.twitter.com/KbgtFyGEXy