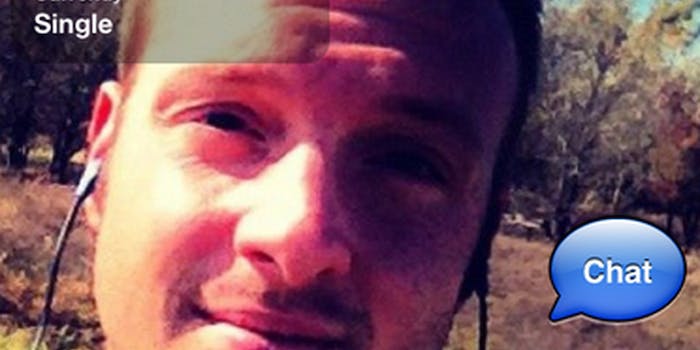 Matt Moore is once again in the limelight, though this time around it’s of his own accord.

Moore, an “ex-gay” blogger who’s written for the Christian Post, had his profile for Grindr— a mobile app popular with the gay community used for quick hookups — outed earlier this week by LGBT rights blogger Zinnia Jones. Jones says she came across Moore’s account after one of her readers tipped her about it. That same day, Moore confirmed that the profile belonged to him.

On Wednesday, the seemingly disgraced Moore took to his own personal blog to give a more detailed account of what happened.

“I started fooling around on this app again a couple weekends ago,” he admitted. “I’ve been in a pretty bad place spiritually for the past few months (really, the last year), and finally something broke in me.”

“For a period of about 24 hours, I ‘tried’ to just be gay again…. kind of as an escape. I know this sounds crazy, and it is crazy; but it’s really how my mind was working and processing.”

Despite what he considers to be a lapse in his faith, Moore asserts that he did nothing more than just talk to a few people.

“I didn’t go out to the gay bars and I didn’t meet up with any guys for coffee or anything like that (much less sex), but in my heart and mind I had strayed far from God.”

In addition to his confessional, Moore used the post as a platform to clarify some misconceptions people and the media might have about him.

“Firstly, never have I ever even remotely insinuated that I am now ‘heterosexual’ or ‘cured’ from same sex desires. I’ve actually clearly communicated exactly the opposite. I have constantly been transparent about my present sinful desires… including the desire for homosexual interaction/behavior/attention.”

He also made it clear that he was not walking away from his religiosity.

“Despite my recent hypocritical behavior and disobedience to Christ, I stand firmly in saying that the Word of God, in totality, is true in every matter it addresses: including the sin of homosexual behavior.”

In an interview with the Christian Post, the beleaguered “ex-gay” blogger also claims that he’s taking precautionary measures that he hopes will prevent him from doing this again.

“I have sold my computer and have had someone put a lock on my phone where I cannot download apps or access the Internet through a non-filtered browser,” he said.

But even he admits that this might not solve everything.

“Ultimately, this isn’t the solution. My heart being captured by the grace of God and brought into humble obedience is the solution. But not taking precautions is dumb, so these are the precautions I have taken.”