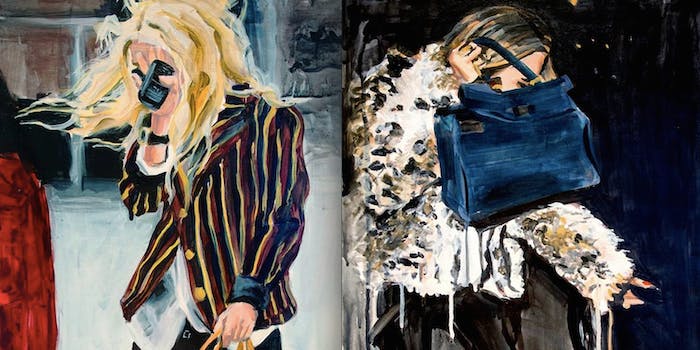 Crack open a La Croix and enjoy the celeb-reality tour.

Matt Harkins and Viviana Olen are not your average curators. They’ve got an eye for pop-culture obsessions, a taste for fizzy drinks, and unique plan to turn our fascination with celebrities and reality TV into a full-blown art spectacle.

Harkins and Olen began their foray into the gallery world last year. The roommates/comedy duo were browsing through Netflix when they stumbled upon the ESPN 30 for 30 documentary The Price of Gold. They were instantly smitten with the major players of the 1994 Olympic figure skating scandal: bad girl Tonya Harding and ice princess Nancy Kerrigan.

Shortly after watching the film, Harkins and Olen launched a Kickstarter with a feasible but eccentric goal: Morph the extra-long entrance hallway of their oddly shaped apartment into a fully realized tribute to the scandal and the women whose lives it forever changed. They quickly surpassed their initial goal of $75 and went on to raise over $2,000 from 150 backers. Fans donated magazines, memorabilia, and hand-crafted art. With a major opening gala, the first celeb-reality scandal museum was born.

The museum still stands—or hangs—but Harkins and Olen have broadened their vision beyond their apartment hallway. They’ve launched a new Kickstarter for a pop-up space in which they promise to take their unusual brand of pop art to the next level.

“This last year has felt so fun, but a thing that has been limiting is that every tour has been through appointment only,” Olen told the Daily Dot. Harkins and Olen have thrilled at the opportunity to share their lovingly curated exhibition with scheduled visitors, but they want to expand the experience to the level of community.

They’ve also developed a new obsession: the endlessly elusive Mary Kate and Ashley Olsen, today noticeably absent from the reboot of Full House, the sitcom that launched them to stardom.

#FullerHouse characters shading The Olsen twins for not being in #FullerHouse is the year's weirdest TV moment pic.twitter.com/hNagCFhGPU

“You never see articles that are like, ‘The Olsen twins—here’s how they’re just like you!’ and it’s like, no, they are very different from us,” Harkins explained.

Spurred by news of Mary Kate Olsen’s absurd wedding to French banker Olivier Sarkozy, which featured enormous bowls of cigarettes as centerpieces, Harkins and Olen set out to design a show just as grand. In a serendipitous moment, they stumbled upon a series of paintings of the Olsen twins hiding from the paparazzi by museum donor Laura Collins, and their obsession crystallized into a vision for a new exhibit.

“Every time I look at one of those paintings, something in my brain activates,” said Harkins.

The duo plans to feature Collins’ art in a full-scale pop-up space, open to the public daily, that will host an array of cultural events and talks.

“It [will] be a great way to bring people together,” Harkins added.

Harkins and Olen have created a video tour of the imagined exhibit in miniature scale model, and it looks like a delightful dreamscape for any celeb-reality fan, with features like the “Lisa Vanderpump confessional stump” and a “Kylie Jenner selfie station” rounding out the captivating collection of Olsen twins paintings.

But Matt and Viviana aren’t just clever curators–they’re consummate hosts who know how to keep their offerings fresh. While guests to the Tonya Harding Nancy Kerrigan 1994 museum were greeted with Diet Cokes, visitors to the new space will enjoy cans of La Croix.

“Each flavor is like a different experience,” explained Olen. “It quenches your thirst, but it makes you more thirsty for more La Croix—and nothing will quench that.”