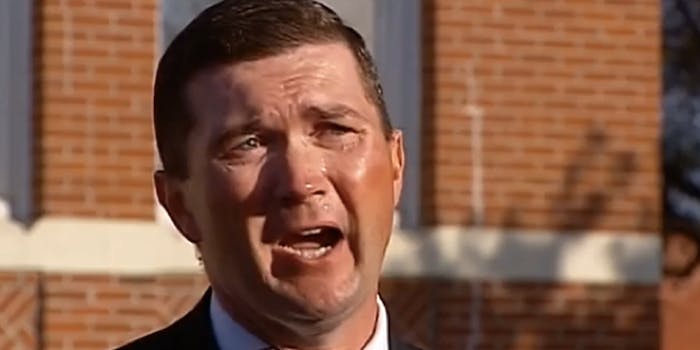 The county prosecutor has asked for new investigation into the rape case of Missouri teenager Daisy Coleman.

Less than a week after the Kansas City Star unleashed a national outcry over the outcome of an alleged rape in the small town of Maryville, Mo., the county prosecutor has asked for a special prosecutor and a new investigation into the charges.

Coming on the heels of a flood of outraged protest, an operation by the cyber-collective Anonymous, and heightened attention to the town of 22,000, Nodaway County Prosecutor Robert Rice’s decision marks an about-face from his previous silence on the subject.

Rice was primarily responsible for the initial decision to drop all charges against a group of three Maryville high school football players who were allegedly responsible for raping and filming then 14-year-old Daisy Coleman and 13-year-old Paige Parkhurst in January 2012.

One of the accused, then-17-year-old Matthew Barnett, is the grandson of Missouri State Representative Rex Barnett, a connection that has led to increased scrutiny of Rice’s motives for dropping the charges—despite what Sheriff Darren White told the Star was “a case that would ‘absolutely’ result in prosecutions.”

The suspects allegedly had to drag Coleman out the window to get her out of the bedroom where the rape occurred, then propped her against the side of her own house and left here there in sub-freezing temperatures, crying and unable to walk. Coleman’s mother said that when she found the teen outside, her hair was frozen.

Rice initially dropped all charges against the boys involved, including felony charges of sexual assault and a misdemeanor charge of endangerment for leaving Coleman by herself.

While Coleman’s mother visited the department nearly every day to check into the case and receive updates, Rice recently claimed during a deposition that Coleman herself had refused to cooperate with the investigation. However, the Coleman family refuted this, telling the Los Angeles Times that Coleman actually refused to sign a Fifth Amendment waiver.

Rice reportedly changed his mind after seeing Coleman’s interview with CNN, in which she claimed to be ready and willing to testify at trial. In a press conference Wednesday evening, Rice stated that he was unhappy with the way the media, particularly the Star, had “inflamed passions” around the case.

But Parkhurst, the second alleged victim who was previously unidentified, came forward this week in an interview with Al Jazeera America to join with Coleman in claiming that the prosecutor’s office had bullied them:

We were cooperating with all of the big felony charges, but they had been really in a way harassing us, and they were constantly putting us down. They weren’t listening to us at all. They were really blaming us for it. They dropped all of the felony charges and then didn’t tell us about it. But then they wanted to pick up a misdemeanor, but our rape advocate told us not to go because it was going to be a very bad interview. …

City Manager Greg McDaniel told reporters that Maryville had been deluged with cyberthreats. While he hastened to add that,“[t[he city was not involved in any way,” many see Maryville as the seat of victim-blaming that aided the prosecution in disbelieving Coleman and Parkhurst.

The Star exposé revealed that after coming forward, Coleman’s mother lost her job, Coleman was dropped from the cheerleading squad, and she and her brother endured harassment that eventually caused them to transfer to a school 40 minutes away. Finally, their house burned down. The cause of the fire is still unknown.

Sheriff White told CNN that he questioned the reliability of the victims’ statements: “The only people’s stories that have been inconsistent throughout this whole thing are the Colemans’—are the victims in this case—and I don’t know why that is.”

But Parkhurst and Coleman both agree that justice has not been served in Maryville—and now they may get their day in court.