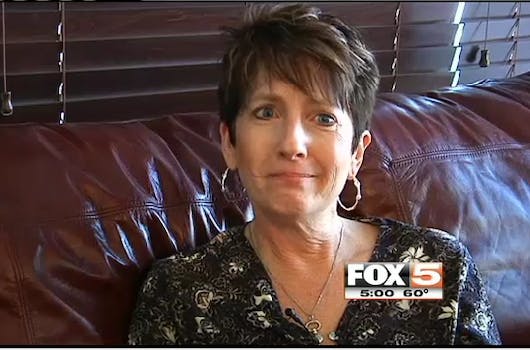 Woman suing Match.com after date attempted to murder her

Mary Kay Beckman was stabbed 10 times by a man Match.com recommended as a date.

After the tenth time he stabbed 50-year-old Mary Kay Beckman in her garage, Wade Ridley’s knife broke. So he turned to kicking the mother of two in the head as she lay bleeding on the floor. About a week earlier, algorithms at Match.com had said the two would make a great match. It set them up on a date.

Beckman survived. And now she’s suing the online dating service for $10 million. She says it doesn’t do enough to protect its users by screening out the potentially violent.

Match.com set the two up in September 2010. Just eight days after their first meeting, Beckman decided to cut things off, saying she’d sussed out his true nature. A few months later, Ridley snuck into her garage and assaulting her.

“When the police arrested him, he said he wasn’t there to hurt me,” Beckman told Las Vegas’s Fox 5. “He was there to kill me. His intent was to kill me that night.”

Beckman said she spent months in the hospital. Doctors performed three surgeries on her, and she suffered a seizure.

Ridley later committed suicide in prison after receiving a decades-long sentence for assaulting Beckman. He was also facing charges he murdered a 62-year-old Arizona woman with a butcher knife in February, 2011. Beckman has claimed Ridley also met that woman on Match.com.

She’s pushing for Match.com to post a disclaimer on the site warning users that matches could potentially be dangerous. Beckman equated it to the warning labels on cigarettes.

“God saved me that night for a reason. I shouldn’t be here today. It’s my mission and goal to save someone from being hurt or help someone make a different decision with their online dating choices.”

“The many millions of people who have found love on Match.com and other online dating sites know how fulfilling it is. And while that doesn’t make what happened in this case any less awful, this is about a sick, twisted individual with no prior criminal record, not an entire community of men and women looking to meet each other.”