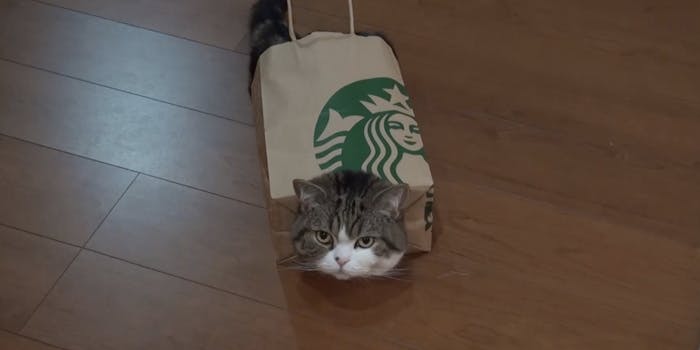 Maru the cat wearing this paper bag is so soothing

This might be Starbucks product placement, but we don't even care.

This nearly silent, minute-long video of famous Internet cat Maru climbing into a paper bag and just chilling is the most calming thing you’ll see today.

There’s something intensely zen about watching Maru wiggle his way into a modified Starbucks bag, leaving his body in the bag while his head pops out a hole at the bottom. He swishes his tail, makes some serious eye contact, and just exists.

Maru the Scottish Fold cat has been gaining adoring fans on YouTube since 2008. He’s just like his fellow YouTube brethren, uploading weekly and nabbing book deals. It’s potentially suspicious that the bag in this video is clearly from Starbucks, but if Maru made a branding deal to promote the coffee shop via this soothing and adorable video, we can’t find any complaints. Get your payday, kitty.