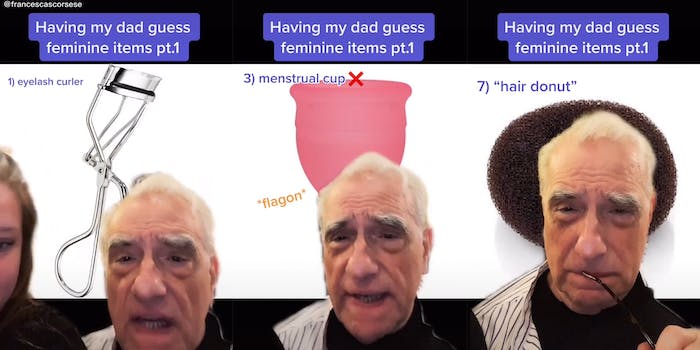 Legendary filmmaker Martin Scorsese is on TikTok. No, he doesn’t actually have an account of his own. That really would be shocking. But he did just make a very funny guest appearance alongside his daughter, 21-year-old actress Francesca Scorsese.

It’s a classic kind of father/daughter TikTok. Francesca gives her 78-year-old dad a slideshow quiz featuring “feminine items” like eyelash curlers and nipple pasties, and he… has to identify them. Presented with a photo of a menstrual cup, he first guesses “a flagon” (?) and then “an eye cup” (??). This is, we have to admit, an absolutely dynamite use of TikTok.

Since Martin Scorsese’s next feature film (Killers of the Flower Moon) is currently in production and therefore doesn’t have a release date yet, this TikTok may, technically speaking, be the best Scorsese movie of 2021. It also cements his role as a chill dad.