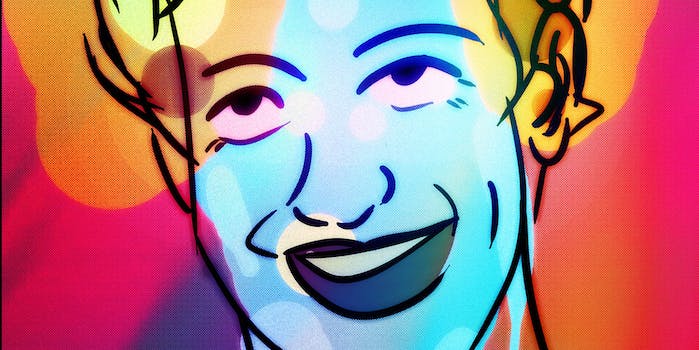 Why no one is asking whether Mark Zuckerberg ‘has it all’

'Can Mark Zuckerberg run Facebook and be a father?' asked no one ever.

“Can Mark Zuckerberg be a father and still find time to run Facebook?” asked no one.

After the Facebook founder and CEO announced that his wife, Priscilla Chan, was pregnant with their first child, the arrival of the #Zuckerbaby temporarily broke the Internet. While the couple’s disclosure about their previous miscarriages sparked a necessary conversation on the subject, one question that has yet to become grist for the Internet thinkpiece machine is a debate over whether or not Zuck can “have it all.” And it never will.

According to Facebook COO Sheryl Sandberg, this is the question nearly every female executive has been subjected to when she dares to juggle her career with the pressures of a growing family—and it’s one that’s never asked of their male co-workers. “What happens is the have-it-all language is only applied to women,” Sandberg explained. “What ‘have it all’ means is ‘have children and have work.’ We assume men can have both and they do.”

Why didn’t Sheryl Sandberg have to write a Lean In book for men? Because when it comes to “work-life balance,” or whatever game that’s designed to make women fail, it’s assumed men have already won.

Mark Zuckerberg is having a baby? How will he balance that with work? CAN HE HAVE IT ALL? If he goes to work right away, is he a bad father?

What’s odd is that men actually do worry about having it all. According to the Washington Post’s Jena McGregor, “both men and women value work-life balance in fairly equal numbers—with a few more men (50 percent) than women (48 percent) calling it a major concern.”

This became such a problem for Max Schireson, the CEO of MongoDB, that he decided to leave his position—because it didn’t leave him enough time to be a husband and a father. “I have missed a lot of family fun, perhaps more importantly, I was not with my kids when our puppy was hit by a car or when my son had (minor and successful, and of course unexpected) emergency surgery,” Schireson wrote on his blog.

When it comes to “work-life balance” or whatever game that’s designed to set women up to fail, it’s assumed men have already won.

As Kurt Soller argues in a piece for New York magazine’s the Cut, the gender divide on the “having it all” debate leaves a lot of men feeling left out. “There aren’t exactly Lean In groups for late-twenties dudes with solid careers who want to figure out how adoption or child care works over a few beers,” he writes.

While providing men with the resources for career mentorship is important, there’s a crucial distinction: The “having it all” debate is never about men because it never punishes men. Many Silicon Valley startups won’t even hire married women because they’re seen as a liability. They have to take maternity leave, and it’s assumed they won’t work as hard as their male colleagues. After all, they have a family to feed.

While this might force men to work long, unenviable hours—with 80 hours a week often the “normal” in Silicon Valley—such thinking forces women out of the workforce entirely. Numerous reports are that women are leaving the tech industry in droves, and there’s a reason for that. As my colleague Miri Mogilevsky pointed out in an editorial for the Daily Dot, professional women are often faced with hard decisions that men have to make—the choice to “lean in or get out.”

And this shows in the absurd gender imbalance in the industry: According to the New York Times, only eight percent of startup founders and six percent of tech CEOs are female.

For women, the idea of “having it all” itself is a myth, even for women who happen to ascend to the highest rungs of the corporate ladder while maintaining a healthy personal life. “Having it all” is an undefined goal post that can continue to be moved to prevent women from scoring—especially working moms. Is she spending enough time with her kids? Does she let them have high-fructose corn syrup? Why won’t her baby stop crying? SOMEBODY SHUT THAT BABY UP.

As Rebecca Shulman argued at Slate, when you’re a mother, there’s always a reason for your “bad parenting decisions to go viral.” And no decision is more divisive than being a working mom.

Many Silicon Valley startups won’t even hire married women because they’re seen as a liability. They have to take paternity leave, and it’s assumed they won’t work as hard as their male colleagues.

However, this is something that Mark Zuckerberg will never have to deal with. When it comes to fatherhood, men are given a participation medal just for showing up, and Zuckerberg will be patted on the back for running the biggest social media company in the world and still making it home at night (instead of sleeping at work or something). Whereas the bar for women is impossibly high, there’s almost no bar for women.

For instance, when it was revealed that Zuckerberg only works 55 to 60 hours a week, people applauded him for it—as if it were some sort of brave thing to do. But what would we say if it were Priscilla Chan running Facebook and putting in those hours? Would we say “You go, girl!” or tell her why it’s time to go home?