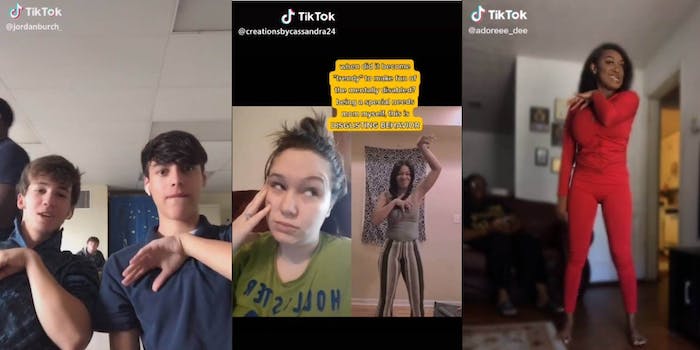 TikTok users mocked people with autism for a challenge.

TikTok challenges are usually fun and trendy, but one of the latest to go viral on the platform is turning heads for all the wrong reasons. Now many are protesting the videos and demanding they be removed.

Participants in the “Autism Challenge” uploaded videos of themselves dancing to a song uploaded by user @zanayasligh while making hand gestures and mocking people with disabilities.

In one of the videos, a mother and daughter participate in the offensive dance craze together, making inappropriate faces and pretending to be disabled. Other users posted their own versions of the challenge, sparking outrage across the platform, as well as on Twitter.

Mom Kate Swenson, creator of Finding Cooper’s Voice, a website where she shares her family’s journey with a child with severe autism, blasted TikTok users who took part in the challenge and urged the platform to remove the videos in a post on Facebook.

“My video has received nearly 2,500 comment(s) and almost all have been
positive in the sense that they are sickened and shocked by this
trend,” Swenson told The Daily Dot via email. “People can’t believe that anyone would use their energy to make fun, bully and humiliate, individuals with disabilities.”

Others expressed similar shock and outrage.

“I have a teenage daughter with autism and I just immediately saw red when I found out about it,” Twitter user @ProVaxx told the Daily Dot. “I was absolutely disgusted that people think it’s ok to mock disabled/ autistic individuals in this way.”

“We are shocked and disturbed by the recent @tiktok_us challenge that encourages mean-spirited, discriminatory and cruel behavior toward people with special needs, including autism,” Autism Speaks, an autism advocacy organization, tweeted in response to the challenge.

Eventually, TikTok users began uploading videos with the same sound criticizing those who are taking part in the challenge.

Now, the videos of users expressing outrage over the challenge have taken over the sound.

For some, the offensive videos being drowned out by criticism still isn’t enough: They want TikTok to take action.

“It is my sincere hope that TikTok removes all ‘autism challenge’ content from their platform and that the users face some sort of consequence (maybe TikTok has some type of equivalent to “Facebook jail?),” @ProVaxx said.

However, Swenson doesn’t think the platform will step in.

“TikTok is saying that the videos mocking individuals with disabilities, don’t go against their community standards,” she said. “There will always be bullies and platforms that support them.”

TikTok has yet to respond to the challenge, and many of the original videos remain on the platform.