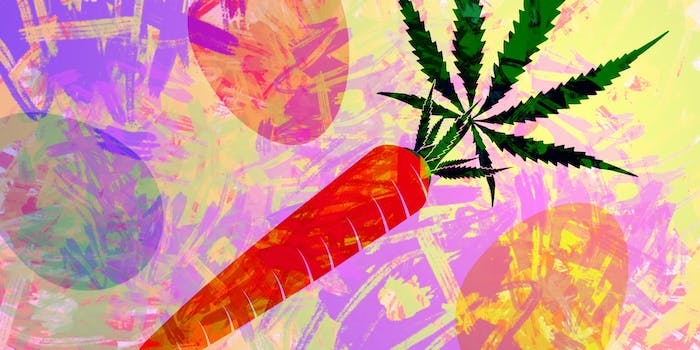 How much marijuana can you feed a rabbit?

Don't say you weren't considering it.

For the first time since 2003, Easter Sunday falls on 4/20, the International Day of Getting as High as Freakin’ Possible. Naturally, this begs the question: what happens when you mix marijuana with cuddly Easter bunnies?

Fortunately, the Internet has no shortage of information on this very subject. Yes, it’s hard to believe that the very same Internet that is responsible for INTERNATIONAL CAPS LOCK DAY and a dating site for people who love small houses would feature such specific content. But it’s the truth.

For example, on the forum Grasscity, a community dedicated to the discussion of all things marijuana, there is a full discussion on how much THC it would take to kill a rabbit.

“Trick question, nobody knows, they haven’t killed one with it yet,” user thereadhead said, linking to a study that actually fed female rabbits regular doses of THC for close to 2 weeks.

“It may be concluded that THC treatment subcutaneously for 13 days in rabbits up to a dose level of 100 mg/kg/day did not produce any significant toxicity, except anorexia and some local dermal irritation,” researchers with the Journal of Toxicology and Environmental Health stated.

That’s right: someone out there earned actual money feeding weed to rabbits. What do you do for a living again?

Meanwhile, over on drugs-forum.com, user polloloco001 had already made up his mind that he wanted to smoke with his new rabbit.

Being a responsible animal lover, polloloco001 made sure to contact the experts at drug-forum.com first. All of them seemed to be in agreement that marijuana smoke was harmless to almost all small animals. Other site users shared their experiences of toking up with everything from birds to dogs to even squirrels. Satisfied with the overwhelmingly positive response, polloloco001 went ahead with his plans.

“I just smoked with the rabbit. It seems to be enjoying itself but man is that thing trippin. I set it on the floor and it has been racing around in circles stopping every now and then to tweek out like its hallucinating or something,” he said in a later post.

Mercifully, forum answers aren’t the only information available out there. In-depth (meaning far more entertaining) studies of marijuana-consuming bunnies can be found on YouTube.

See? In neither case do the rabbits appear to be fazed by the weed. On a somewhat related topic, a chocolate bunny can effectively be used as a bong in a pinch.

Even Bugs Bunny, the most trustworthy of the Warner Bros. characters, enjoys the occasional blunt.

While assertion through specialized forums, YouTube videos, and animated mascots is all the authority we need on the subject, let’s remember that such content was created by people who were already fans of cannabis. These people would recommend (and likely supply) marijuana for anything, including stressed-out air traffic controllers. The real question is: what do the experts think?

In a 2011 article on the dog care website TheBark.com, veterinarian Shea Cox stated that “the drug is eliminated quite quickly from the body and most pets will make a full recovery within 24 hours,” and “even in extreme cases, the vast majority of animals recover fully and death very rarely occurs.” In other words, it sounds like, while marijuana may do quite a number on your animal’s neurological system, death is not something common.

Even PETA, the animal rights group that feels every single animal should roam the earth freely (except humans), seems to agree with animals using marijuana, albeit only for medicinal purposes.

“If the proper administration of marijuana can truly relieve dogs’ pain, then they should be given the same consideration that humans in pain are given, with regular doses to help reduce their misery,” PETA said in a statement to Gothamist in 2011. “But it’s an entirely different matter to amuse oneself by getting the cat drunk or the dog high. In fact, it sounds like something that only a total pothead or moron would do.”

And that goes for rabbits, too.