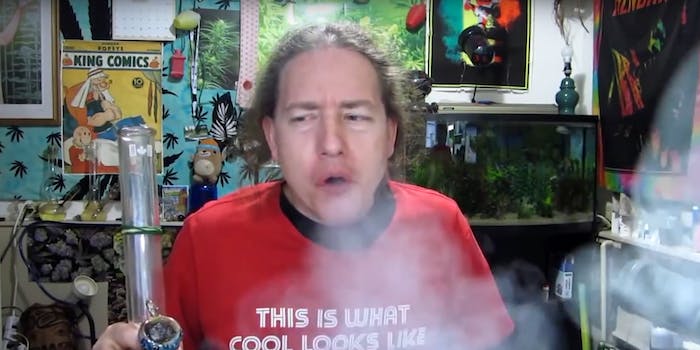 It can be hard to deal with the fact that Marijuana Man is a real person.

Somewhere in the coniferous forests of British Columbia, there’s a compound covered in Bob Marley posters, tiki masks, and more concentrated weed paraphernalia and idolatry than any other place in the world. Every week, the guy who lives among this stuff offers video dispatches about absolutely nothing at all.

You watch Marijuana Man—in a head-to-toe camouflage onesie— smoke and listen to The Cars.

You watch Marijuana Man—in a video called “floating,” with a description that reads “marijuana man get high”—in a loose tie worn over a black basketball jersey, scream “FIRE IN THE HOLE!” before taking a rip on a noticeably huge octopus bong.

You watch marijuana man take a bubble bath and say: “You know what goes great with a bath?” Spoiler alert: it’s weed. He falls asleep a few minutes later.

If it’s not clear, I fucking love Marijuana Man. His channel is utterly arresting. There is no hook; there is no value proposition; it’s hard to tell if he even cares that you’re watching.

There are a lot of people who have carved out an audience by smoking weed on camera, but usually it’s founded on a central idea—like, say, a cute girl answering personal questions  in an odd, quasi-ASMR vlog. On the other hand, Marijuana Man will pass out in a fucking bathtub and still upload it to the internet. He’ll do 55 minutes straight and file it in the “nonprofit and activism” section. He’ll do a 17-minute video titled “Yes! I have smoked Crack.” It starts with about 45 seconds of wheezing.

Nobody has ever achieved such perfect don’t-give-a-fuck zen, and honestly, I’m kind of jealous.

I needed to get to the bottom of this, if only to confirm I wasn’t making it all up. I sent an email to Marijuana Man and asked for an interview. He promptly responded with his phone number, and when I called him, he didn’t seem to have any recollection of doing so.

“Hey, is this Marijuana Man?”

“This is Luke from the Daily Dot, how are you doing?”

We talked for about seven minutes, and it was the most incredible interview of my career. I had tracked down YouTube’s Bigfoot and was spending a few candid moments in his natural habitat.

Marijuana Man rarely responded with more than one word, and when he did, it was in these amazing little koans. At one point he mentioned that he has had the internet “since 1984,” which made me really want to track down Marijuana Man’s ancestral BBSes. I seriously cannot adequately describe how beautifully authentic he turned out to be.

“Why do you think people like watching your videos?” I asked.

“Because I don’t try to educate people,” he replied.

“You don’t try to educate people?”

“Yeah, they don’t like to be educated. All the weed videos are about educating people. I don’t watch them, I look away. They just go on and on about the weed. ‘Oh we got some great bud here, it’s been grown at whatever.’ We never talk about weed. That’s the thing, it’s boring.”

The bombshell came shortly after that exchange. I asked Marijuana Man what he does for a living, and he told me “this.” Like… like this? Like the videos? Yeah. I know.

If he’s being honest with us, Marijuana Man is getting paid $78,000 a year to fall asleep in his bathtub. That’s incredible.

I’m not saying it’s a dream come true, because I would be consumed with life-destroying anxiety and existential purposelessness if that was my gig, but still… $78,000 a year to get stupidly high in front of a camera in your pajamas; $78,000 a year to try out The Megatoke; $78,000 a year to let his balls hang out in a coughing fit; $78,000 a year for a video called “Marijuana Man reads some inspiring words from the Bible.”

“And god told the holy man, take this marijuana. And smoke it.” He is literally playing with house money.

I don’t know, it just puts everything in perspective. I told my friend about this, who loves her job at a very prominent, influential nonprofit organization, and asked her if she’d leave it all to make weed videos for $6,500 a month. Her response?

And you know what? That’s fine! This is the beauty of the 21st century. Nothing matters in a digital economy where you don’t need any capital to succeed. We were told from day one to turn what you love into your career, and if you feel miffed, you’re just mad that Marijuana Man found a loophole.