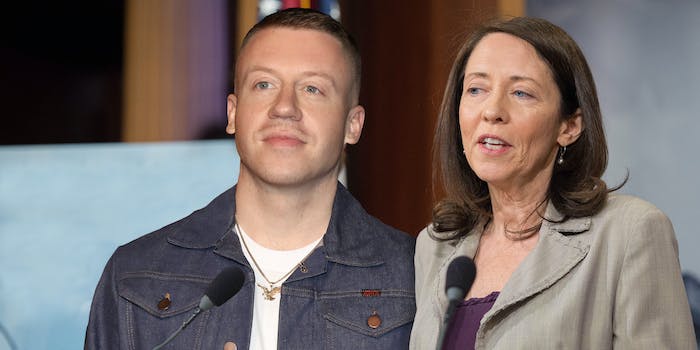 A U.S. senator has done the worst thing in the healthcare debate: Invoke Macklemore

Being a politician in 2017 is a lot like being a brand online in 2017. For people to like you—or at least not actively hate you—you have to be this almost impossible blend of inoffensively charming, seemingly guileless, as well as hip without looking like you are trying to come across hip.

.@SenatorCantwell on health care bill: "I wish I could get a famous rapper from Seattle here, Mr. Macklemore, because this truly is a heist" pic.twitter.com/qMiEdniA0X

It’s… perfect. The burn is a little stilted, and she calls him “Mr. Macklemore.” But what would you expect from a 58-year-old? It’s cute, and a good joke. The Heist!

It also started a wonderful riff on her construction.

"to paraphrase our great canadian neighbor – drake – if this healthcare bill passes, none of us will have… more life."

"I wish I could get a famous rapper from outside Detroit here, Mr. Eminem, because this bill is really shady." https://t.co/JK6yOS9jvD

"If only we could get Chance the Rapper here, because with this bill the GOP doesn't want us all to do the same drugs no more" https://t.co/WSDJex0XzX

Keep doing you, Sen. Cantwell. It’s what Macklemore would want.