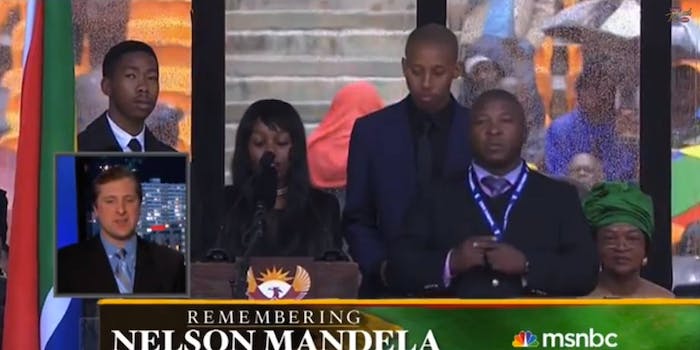 You know that faked sign language interpretation at Nelson Mandela’s memorial service? Yeah, it was all signed gibberish. But now we have some idea of what Thamsanqa Jantjie was really saying as he stood on the dais next to world leaders and Mandela’s family.

“Inside, joining in this week’s cigarette, inside to prove, and on and on, to support I would please to say from me to you,” was one phrase.

Another: “Hello, welcome so far. Well, cigarette join, bringing in different to you. A circle, I would like to pray this offering, basically, this is fun, all of this… balls, to prove this is good, I’m sorry.”

During the performance, Jantjie’s facial expressions seem to give away that he’s quite literally grasping for the words.

It’s worth pointing out that Jantjie was supposed to be signing in South African Sign Language—not ASL. Also, translating gibberish leaves a lot of room for creativity—this isn’t exactly a precise reading. But nonsense is still nonsense, and this is pretty damn funny.