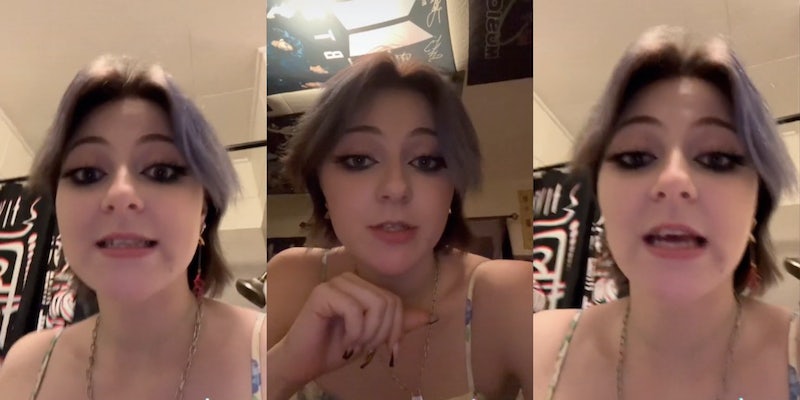 ‘Get his a** fired’: Host claims new manager said underage co-workers looked like ‘strippers,’ prevented them from using the bathroom on the clock

'He blocked us from using the bathroom and told us we weren't allowed to drink water.'

A restaurant host says that their new manager said that their underage co-workers looked like “strippers,” despite being “well within dress code.”

In the video posted by TikToker Strawberry (@strawb3rryslu7) on Sept. 24, they say that they only worked at the restaurant for a month before a new manager started working there, claiming that he unfairly enforced the dress code and insulted underage employees.

“They were in cocktail dresses that went all the way down to their ankles and heels. They didn’t have any makeup on. They just had eyelash extensions,” Strawberry explains. “Mind you, that is well within dress-code regulations. I have read the contract.”

They continue that they were previously sent home for wearing “a pencil skirt and a blazer,” pointing to the unclear and “conservative” dress code expectations.

“We got a new manager today, and it was his first day. He sat in his office. He blocked us from using the bathroom and told us we weren’t allowed to drink water,” Strawberry continues. “And then after all of this he walks up to one of our servers, and he goes, ‘The hostesses look like strippers. That’s a bad look.’ Completely disregarding the fact that being a stripper is fine and using it as a derogatory term to describe three minors.”

They say that they decided to “confront” the manager about his disrespectful comments, explaining to him that they have “gone over the dress code regulations with the other managers.”

“And then he goes, ‘Well, we just don’t need a hoochie mama look as soon as people walk into the restaurant,'” they say in the clip. “So that happens, and I go, ‘You are demoralizing. You are dehumanizing. You are disrespecting and being extremely unprofessional to us.'”

After confronting the manager, Strawberry says that he claimed the “head chef” made the comments instead of him.

The video has reached over 71,000 views as of Sept. 26, with commenters praising Strawberry for sticking up for their underage co-workers. Many users urge them to call OSHA, saying that banning bathroom breaks could be a labor violation.

“Girl if you don’t call OSHA. Tell them you’ll call if they continue,” one commenter suggested.

“Document EVERYTHING. Who said what, day, time, all of it. It’s much easier when you go to report a place like this to osha or whatever,” another said.

Others put the manager on blast for his “creepy” comments toward minors.

“I’d definitely love to hear more, the chef an ur manager are grimey as fuck. sayin ts abt minors is not okay what so ever. im so sorry you have to deal,” a user said.

“If he said that about minors, get his ass fired cause that kind of bullshit from people will escalate to assault,” another wrote.

“He is a typical manager on a sexist creepy power trip. They get egos so fast,” a third added.

In a comment, Strawberry claims that their manager also said to them, “You’re almost 18, right? Almost legal.”

The Daily Dot reached out to Strawberry via email.