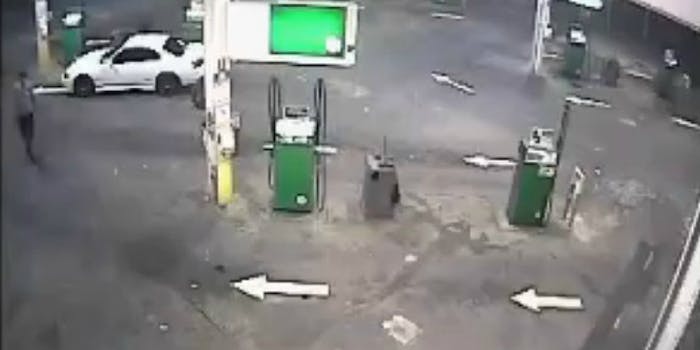 With those drop-kicking skills, he could easily become the third member of the Rock 'N' Roll Express.

That said, this dude’s successful attempt at thwarting a potential car thief in Malak, Australia, is badass. Or, if you’d prefer a more literal term, it’s kickass. Watch as he protects his property with as much ninja-like gusto as he can muster.

From our angle, the dropkick into the car looked technically proficient. Probably not on the level of Mr. Perfect, but strong nonetheless, especially since he was aiming for a moving car. But in reality, the dude got lucky, because once the car started rolling, he was stuck and at the mercy of the guy who was taking it. Or at least his legs were.

A few seconds later, the alleged thief, identified by Northern Territory police as 24-year-old Timothy Slater, abandoned the car and ran away from the petrol station. According to NT News, Slater is wanted for alleged offenses of aggravated assault, unlawful use of a motor vehicle, and stealing.

Though it’s unclear about the car owner’s future, it’s a good bet that he could become either a superhero, pro wrestler, or pro wrestler with a superhero gimmick.