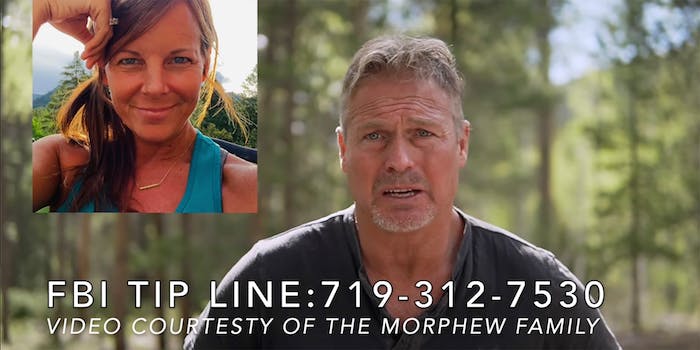 ‘I just thought, give him another vote:’ Man accused of killing his wife and casting her mail-in ballot for Trump

'I didn't know you couldn't do that for your spouse.'

A Colorado man being charged with murdering his wife is now facing an additional charge in the bizarre case: Submitting a ballot on her behalf for then-President Donald Trump.

The case involves Suzanne Morphew, a 49-year-old mother of two who disappeared last Mother’s Day while on a bike ride. That disappearance led to a year-long search by the Chaffee County Sheriff’s Office, who arrested Suzanne’s husband, 53-year-old Barry Morphew, nearly two weeks ago.

Barry, who took to Facebook shortly after Suzanne’s disappearance in a video plea for her safe return, is being charged with first-degree murder, tampering with evidence and attempting to influence a public servant, according to the Washington Post‘s initial story on the arrest.

But the intertwining of the Morphews’ story with Trump’s presidential aspirations came to light in a series of stories from news outlets over the past few days, publicizing FBI interviews with Barry Morphew.

Lori Mitchell, the clerk and recorder in Chaffee County, received the suspicious mail-in ballot last fall, as the Post reported in its follow-up story on Saturday.

Suzanne had been missing for months, with many in the community aware of her disappearance and the ongoing investigation. But Suzanne’s ballot for Trump arrived in the mail, with Barry’s witness signature on it, but without her own signature on it as required by law.

“I felt I should contact the sheriff when I saw the name,” Mitchell told 9News in Denver. “It was stunning to see that ballot in our batches.”

Her ballot was turned over to the sheriff’s office, who filed it as evidence in the case. Mitchell still went through the process for checking on the ballot that arrived without a signature. According to 9News, “The clerk sends out a letter letting the voter know there is an issue with their signature and they have up to eight days after the election to ‘cure,’ or fix, the issue. In 2020, it was nine days because the eighth day was Veterans Day.

“We still completed our statutory requirement by sending out this cure letter,” Mitchell reported, “and no one responded.”

The ballot, subsequently, was not counted in the election easily carried by President Joe Biden, who won more than 55 percent of Colorado’s vote compared to Trump’s nearly 42 percent.

According to the Post, Barry Morphew told FBI agents who interviewed him last month that he cast the ballot because “all these other guys are cheating,” referring to the voter fraud allegations Trump made throughout the campaign and well into the interregnum.

He also said he did it “just because I wanted Trump to win” and contends his wife would have backed Trump were she alive to do so.

“I just thought, give him another vote,” he allegedly said to his interviewers.

Morphew also maintained, upon being told that submitting a ballot in that way was illegal, “I didn’t know you couldn’t do that for your spouse.”

He is now facing a felony count of forgery and a misdemeanor count of offenses related to mail ballots, in addition to the earlier charges in connection to his wife’s death.