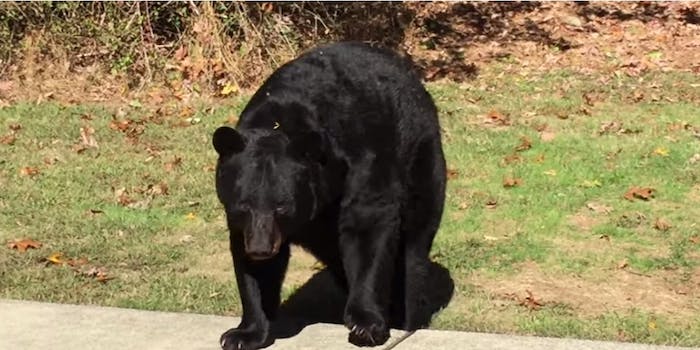 World’s most confident man orders bear to leave his neighborhood

This guy may have a future in bear-wrangling.

Picture this: a black bear has wandered into your neighborhood and is approaching you. Chances are, you don’t want to become its latest meal, so what would you do? Run? Scream?

If you are YouTube user Rob Schnapp’s co-worker, all you need to do is to say “All right, that’s far enough, buddy. Come on, get out of here,” and the bear will wander away.

It is unknown whether Schnapp’s co-worker has used this technique in the past, but New Jersey is definitely the place to perfect it. Despite it being a densely populated state that contains most of the New York City and Philadelphia metropolitan areas, its residential areas do occasionally host these ursine creatures when they make their way out of the Pine Barrens. According to the New Jersey Department of Fish and Wildlife, there have been over 2,200 instances of bear activity reported in 2014 alone, a staggering increase from 2013, which saw just over 1,600 cases.

If you live in New Jersey, you’d better start practicing your technique for when one of these furry creatures appears in your yard.