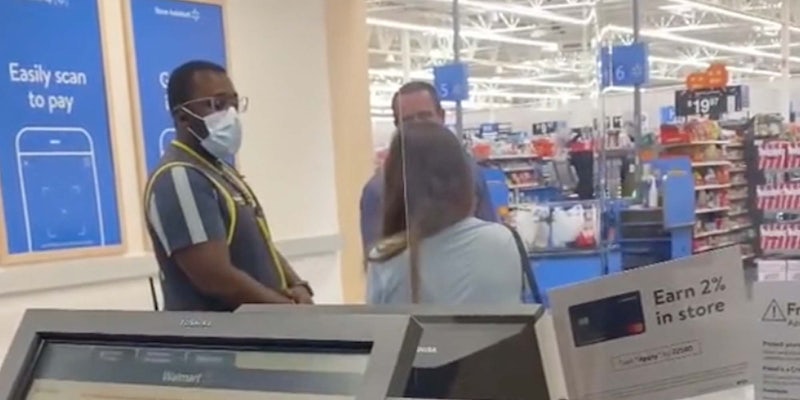 ‘Shut your mouth’: Male Karen demands to speak to Walmart manager—and manager shuts him down

'I'm not just going to stand here and take that from you.'

In a TikTok posted on Monday, a man tells a Walmart employee to repeatedly “shut [his] mouth” and asks to speak to his manager.

“I’m not just going to stand here and take that from you,” the employee says while the customer waits for the manager to arrive.

“Yeah, you are, because you’re an employee and I’m right and you’re wrong,” the man says. “Shut your mouth.”

The man and a woman accompanying him then speak with the manager and call the employee disrespectful. They attempt to make a return. The manager says that there are no refunds for the item they are trying to return and that they didn’t purchase it at the Walmart in which they are currently shopping.

The man begins to yell at the employee again. “Don’t do that,” the manager says. The manager then leads the man and woman away from the employee.

On Wednesday, @drpepper_haha posted a follow-up video. The TIkToker said that the employee heard in the original video told the customer that he couldn’t return his item because it was in “bad condition.”

After calling a number to try to get a refund, the couple demanded that the Walmart employees give them a refund.

“That’s when my manager came and started talking to them and told them the exact same thing that we did,” said @drpepper_haha. “They just kind of walked off.”

Folks in the comment section of the video praised the manager—and ridiculed the man.

“I love the managers that stand up for their employees!!” wrote @baker_baker6.

“They wear a [collared] shirt once and think they rule the world,” commented @hawk025.

The TikToker who shared the video also revealed in the comments that after the altercation, the manager let the Walmart employee who was being berated take his break.

The Daily Dot reached out to @drpepper_haha TikTok comment and to Walmart via email.