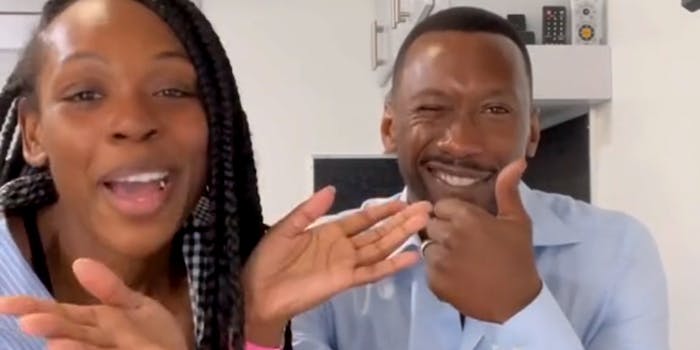 ‘He’s like the super cool older brother you just want to be around’: People love that actor Mahershala Ali appears on his personal assistant’s TikTok

'What a blessing to have a good working relationship with your boss.'

People on the internet are praising actor Mahershala Ali for making appearances on his personal assistant’s TikTok, saying he seems like the “kindest person.”

Simone Leanora (@simoneleanora) is a Los Angeles-based content creator, actor, and the PA of Ali. Ali has made a couple of appearances on Leanora’s TikTok to help answer questions left by users in her comments. His latest cameo was on her June 9 Tiktok to answer the question, “Personal assistants go with them to set?”

“Another question people ask is, ‘Do you come to set when you are a personal assistant for an actor?'” Leanora says. “And the answer varies, I think.”

“Depending on the relationship, but probably,” he says.

“And the reason being because they’re literally lost without us, can’t do anything,” she says. The two joke about stereotypical tasks many believe personal assistants are burdened with like tying actors’ shoes or holding umbrellas for them when it rains.

“No, but it’s an important relationship,” Ali clarifies. “Makes a huge difference in my work. I can say the difference between having an assistant and not is pretty significant, and so I’m very grateful to have that luxury/necessity I feel now. It’s definitely a luxury, but it makes a difference.”

Leanora’s video with the Oscar-winning actor has garnered more than 127,000 views and over 400 comments.

In the comments section, viewers said Ali seems like “a really cool and sweet person.”

“He just seems like the kindest person. Just when I thought I couldn’t love him even more!” another user commented.

Others were just so surprised he showed up on her TikTok. “I just can’t believe I’m watching him casually talk on tik tok lmao. This is why I love this app. Thanks for doing this!” they wrote.

“He is just…. man he is so cool! and I love y’all’s relationship lol,” a user commented.

In the caption, Leanora encouraged users to keep asking questions about what it’s like being a personal assistant to an A-list actor. The creator replied to almost all of the questions, promising users she would ask the Moonlight actor to answer them in upcoming videos.

The Daily Dot has reached out to Leanora via email for this story.