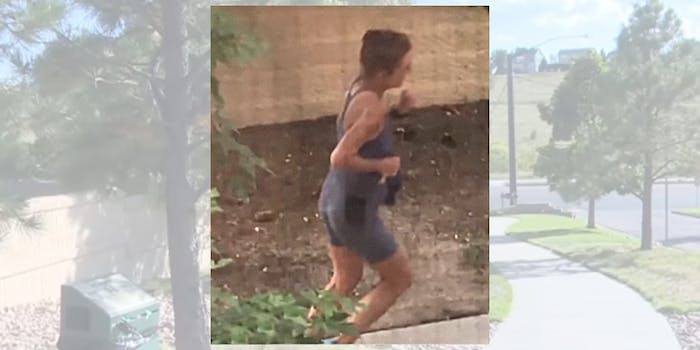 A rogue woman is pooping all over the streets of Colorado

This jogger isn't letting a little poop slow her down.

Next to public speaking, public pooping has to be the greatest fear of most Americans. Some people will even drive home from work, or the bar, just to avoid going number two where they can be heard. But apparently, that’s not a problem for a jogger in Colorado. She’s been dubbed “The Mad Pooper” by one family and she has been defecating on the sidewalks all over the town of Colorado Springs.

Cathy Budde, who caught the woman in the act, said she was sure it was just an embarrassing accident the first time she saw it happen. “I was like ‘Are you serious? Are you really taking a poop right here in front of my kids?’ and she was like ‘yeah sorry,'” Buddy told local news station KKTV. “I thought for sure she was mortified, it was an accident, she’ll go get dog bag, come back clean it up, you know and never run here ever again. Not the case.”

Budde and her family have now seen the woman dropping trow multiple times and other people have come forward to say they’ve also seen her leaving some nasty surprises around town.

The police have been notified and Budde even started leaving notes up around a nearby park, addressed to the pooper.

She also noted that the woman has other options.

“There’s plenty of public restrooms less than a block away from where she’s targeting. This is intentional.”

“It’s abnormal, it’s not something I’ve seen in my career,” said Sgt. Johnathan Sharketti of the Colorado Springs Police Department, “For someone to repeatedly do such a thing … it’s uncharted territory for me.”

If caught, the mystery pooper could face charges of indecent exposure and public defecation.