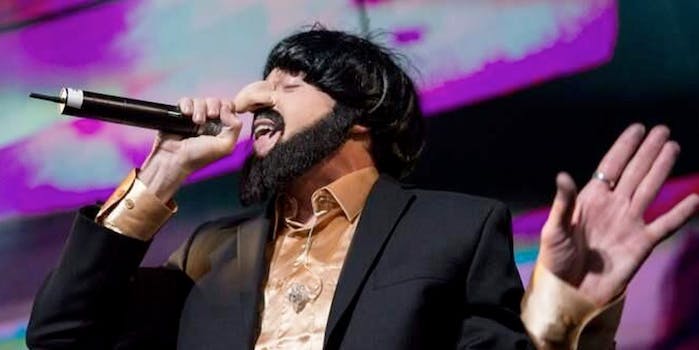 Macklemore’s 2014 Internet Apology Tour rolls on through summer. This week, he’s letting his fans know that he’s sorry he impersonated a Jewish dude with a big honker.

The Seattle rapper, famous either for writing the song about homosexual awareness and advocacy, apologizing to Kendrick Lamar after supposedly “robbing” him of a Grammy, or both, posted at a secret show at Seattle’s EMP Museum Friday evening wearing a beard and wig and giant schnoz on his noggin. He looked like a rabbi in street clothing, or a modern appropriation of Shylock in The Merchant of Venice.

Natch, the Internet ran wild with the happenstance, accusing him of donning Jew-face. Macklemore, conceivably, reverted to his fortress of pillows, where he was consoled by Ryan Lewis, emerging Monday to provide a seven-paragraph, Tumblr-penned apology for the error, and suggest it wasn’t intentional.

“As it turns out,” he writes, “the fake noses they sell at the costume store are usually big (my nose didn’t fit most of them). So I ended up with a big witch nose. I went with a black beard, because that’s the furthest color from my natural hair. Disguise was the intention. I personally thought I looked very ambiguous in terms of any ‘type’ of person. Some people there thought I looked like Ringo, some Abe Lincoln. If anything I thought I looked like Humpty Hump with a bowl cut.”

Dude, be careful. You know that Humpty Hump is black.

He closed by mentioning the “causes for which I’ve supported” and encouraging everybody to pay attention to the Anti-Defamation League. Because we all need to stop defaming. And apologizing. Or explaining. Or listening to Macklemore. Or whatever.