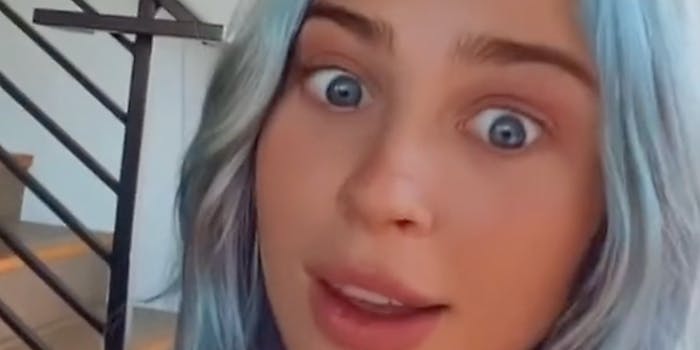 'Love Island' producers are still hung up on 'logistics.'

Love Island USA season 3 star Leslie Golden stirred the pot by leaving the show early, leaving fans speculating on what happened. But she also recently called out the show for its traditional views on sexuality.

Golden, 24, revealed on Instagram stories that she brought a dab pen to the Love Island villa, insinuating that was the reason for her exit. In another story, in response to a question about whether she could “couple up with a girl,” Golden said she was told to “stick with the theme of the show” after she talked about “Kristen Stewart for 20 minutes straight.” She also mentioned that she was most attracted to now-eliminated contestant Genevieve Shawcross.

Golden seemed to address both of these things on TikTok.

Dating competition shows like Love Island and The Bachelor have long clung to heterosexual relationships, even though the odds that all the contestants are straight are low.

TikToker Evan Mathis responded to Golden’s story, saying, “This is why I don’t fuck with Love Island in the U.S.,” adding that popular dating shows are too stuck in their “format,” and that people need a “queer, inclusive version of Love Island.”

Mathis adds that the show is also missing out on a whole other audience: “The gays will watch anything with gays in it.”

The producers of Love Island, which originated in the U.K., addressed the lack of queer contestants in June: “There’s a sort of logistical difficulty, because although Islanders don’t have to be 100 percent straight, the format must sort of give [them] an equal choice when coupling up,” said ITV’s Amanda Stavri.

This came after a report that the next season would feature queer contestants. Love Island has previously had bisexual contestants.