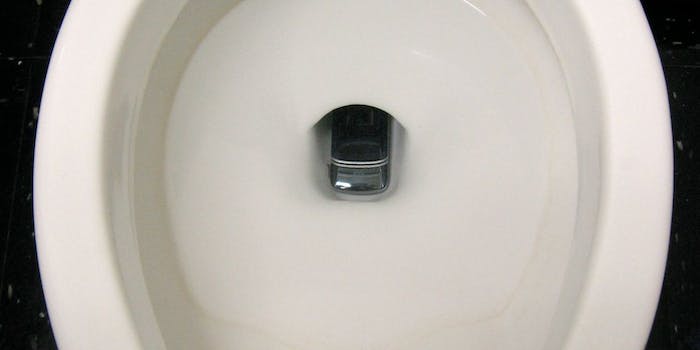 Louisville mayor ridiculed for apparently tweeting from the toilet

Is Greg Fischer really so different from you and me?

Who among us when, in the middle of using the restroom facilities, hasn’t felt the urgent need to tweet about our day? Who among us hasn’t taken care of business on the phone while allowing our digestive system to TCB in its own special way? And who among us hasn’t wondered if the Cleveland Browns are finally ready to go to the Super Bowl when you are, in fact, taking the browns to the super bowl at that very moment?

Whether you’ve accomplished any of the above isn’t all that relevant to this story. What is relevant is that the mayor of Louisville, Kentucky, apparently has.

That was the conclusion by some Twitter users after Louisville Mayor Greg Fischer dumped this tweet out into the world.

Let’s focus on the surroundings in the tweet. As Fusion writes, “Note the tiles, the style of which are often found in bathrooms. Note the left hand resting on the lap. Note the distance of the paper relative to the alleged bathroom floor.”

To me, the most damning evidence is the lack of desk or table upon which he’s resting the newspaper (and if there is, it’d be an awfully small piece of furniture). Where else, besides the subway or a bus, would you rest the newspaper on your lap as you read?

Either way, much of Twitter was convinced that Fischer was on the potty at the time of the photo.

The mayor’s office apparently hasn’t responded to multiple questions about whether Fischer was tweeting in the bathroom. But it doesn’t really matter, I suppose, because whether or not he likes the idea, Fischer is now a role model.

Because when I was a kid in the middle of potty-training, I remember my parents telling me that everybody poops, including President Ronald Reagan. These days, technologically-savvy parents in Kentucky can say, “Everybody poops. And everybody poops while tweeting, including Mayor Greg Fischer.”