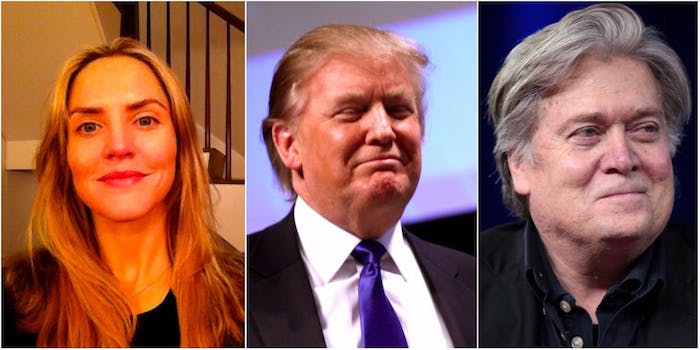 This former British MP speculates that Donald Trump, Steve Bannon will get the death penalty

Big claim if true (except it isn't).

If you are unfamiliar with Louise Mensch, first of, congratulations. Knowledge of her existence is not something you need to enjoy life’s rich tapestry. But since you are here thanks to a wildly evocative headline about someone claiming both President Donald Trump and his top adviser will be executed for treason, well, you might as well get some backstory.

Mensch is a former member of British Parliament who has developed a second career spouting wild, unconfirmed hypotheses about President Donald Trump and Russia. In perhaps her (previously) most infamous claim, made on the blog Patribotics—which is dedicated to “Exposing Vladimir Putin’s War on America”—Mensch reported that anonymous sources told her that a “sealed indictment” against Trump had already been issued.

Hard to top that one, but Mensch is sure about to try. Here’s her latest missive (which, we should make clear, is probably not true) that went on all morning.

My sources say the death penalty, for espionage, being considered for @StevenKBannon. I am pro-life and take no pleasure in reporting this.

Bannon coordinated the Russian attack on America since 2010.

You might be asking “What Russian attack on America since 2010,” and for that answer, it’s time for some “game theory.” (Important Note Here: If you are also unaware of the phrase “it’s time for some game theory,” do not bother clicking that link, lest you be subjected to 10,000 more unhinged tweets that somehow link together the U.S. invasion of Iraq, Ed Snowden’s cybersecurity leaks, and Russian involvement in the 2016 election. What you just need to know is that some people think Russian influence has gone on longer since 2016 and that Breitbart played a complicit role in spreading Russian propaganda.)

Anyhootseedoodle, I can’t help but wonder whether that will extend to any other members of the Trump administration.

I can’t help but wonder whether that’s going to extend to anyone else.

being considered for others. Guiliani begged for a deal and was told to pound sand. He sang completely for "consideration" at sentencing

Holy shit. Rudy Guiliani, basically guilty of treason. America’s mayor. The head of U.S. cybersecurity. And it’s gone completely unreported? Now I have to know: Is there an “active agent” of the Russia state in the White House right now?

Yes sir. And this is not about mere alt right. Since 2010 @genflynn and @sebgorka have been agents of the Russian state with @stevenkbannon

But there’s no way, like, the president of the United States could be executed for treason, right?

The evidence against @realDonaldTrump is SIGINT. It is recordings audio and visual. It is overwhelming. He may indeed face the death penalty

Mensch believes she is getting this information to help ready America for a bombshell from former FBI Director Robert Mueller and his investigation into possible collusion between Trump and the Russian government.

I am going to report a lot more today. There are multiple stories coming out. Mueller is preparing the public for massive action

That isn't to imply this action is imminent but that the work of public prep is starting now. When public knows what Comey knew…

Mensch’s feed is now just full of her retweeting people astounded at her claims, and others agreeing that the president should be executed or spend the rest of his life in jail. The entire basis for her speculation seems to be centered on one tape she hopes to report on soon that will even turn Trump’s base against him.

Once Trump's base knows about one tape they won't support him any more than @MaxineWaters does (i.e. trump's base will hate him and Putin)

Of course, this is all wild, wild, wild (did we mention it’s unfounded, too?) speculation. Mensch is claiming she knows that Mueller’s team will be recommending a sitting president be charged with treason and that he be executed. That’s never happened before! Thankfully, she’s getting a great deal of dismissive scorn on Twitter (which, let’s be honest) is what this deserves.

"I take no pleasure in reporting this" reads like when the animal appliances in the Flinstones would say "It's a living!" to the camera

My sources say the Cinnamon Challenge for Kushner. I am white, and hate spices. I take no pleasure in reporting this. https://t.co/DFtOebOk7a

My sources say the death penalty, for espionage, being considered for Austin Powers. I am pro-life and take no pleasure in reporting this.

My sources say the death penalty, for bad coffee, being considered for @DunkinDonuts. I am pro-coffee and am overjoyed in reporting this. https://t.co/t8GScGkuHq

My sources say death penalty, for turnin the frickin frogs gay, being considered for @gov. I am prolife & take no pleasure in reporting this

I don’t have any sources, but it’s safe to say this is all just reckless speculation by a blogger with a mouthpiece that is way too large to be doing these sorts of things.

Or the president is about to be arrested.

Could go either way, I guess.