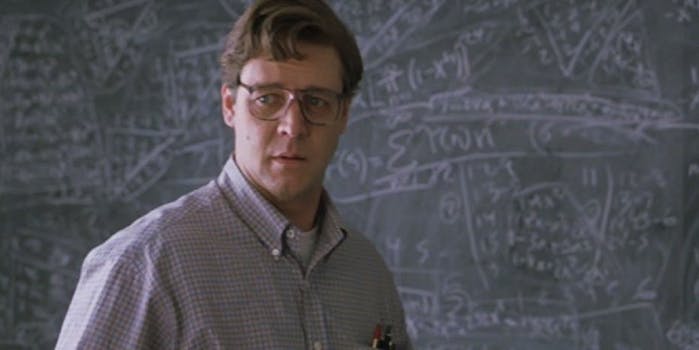 Screengrab via A Beautiful Mind/Universal Pictures

Okay, guys, it's time for some game theory.

One result of the U.S. presidential election has been the rise of the extremely long political Twitter thread. Rants that would formerly have been blog posts are now miles-long collections of tweets about President-elect Donald Trump. And none stands out more than the one that begins “Guys. It’s time for some game theory.”

Eric Garland, a self-described futurist and competitive analyst, went in on reported Russian election interference for more than 120 tweets Sunday. He tried to tie everything from 9/11 to former President Bill Clinton to NSA leaker Edward Snowden to the current allegations of Russia’s government tampering with the U.S. election.

His basic message—that Russia had both motive and opportunity to swing the election toward Trump—isn’t totally crazy, but a lot of people found Garland’s “OMGWTFBBQ!” delivery, his accusations against whistleblowers like Snowden and Chelsea Manning, and his unsupported promise of “game theory” laughable.

So now we have the “time for some game theory” meme:

game theory is like the quidditch scenes from harry potter. it means "a game you made up"

its time for some game theory: waluigi represents anarchist ideology in opposition to wario's statist and mario's monarchist tendencies

Bring it in guys, it's time for some game theory *every character from every election, blog, & news show comes in for a HUGE twitter thread*

Time for some game theory:

Its impossible to win mario kart with toad

Guys. It's time for some game theory. *shoves a chess bishop up my ass and dances around the room*

Guys. It's time for some game theory.

Where and how does Master Chief go to the bathroom

<THREAD> I'm now hearing this meme that an A press is an A press, you can't say it's only half.

Guys. It's time for some game theory

Whether you found Garland’s thread convincing or not, “time for some game theory” is a perfect punchline. It applies to anything that sounds like bullshit—any theory about video games, or the Venn diagram of the two. And in the context of everyone on Twitter suddenly acting like an expert on politics, it’s the perfect meme for our collective case of terminal, late-stage 2016.