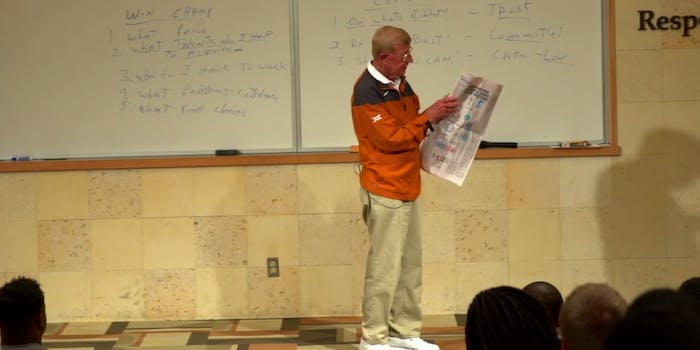 How did Lou Holtz just do that?

You probably know Lou Holtz as a legendary Notre Dame football coach. Or, if you were born after he retired from his last job at South Carolina in 2004, you might recognize Holtz from his work as an ESPN college football analyst with a pronounced lisp that has inspired a fake Twitter account with more than 77,000 followers.

But did you know he could magic? Actually, you might because it’s not unusual for Holtz to turn to his standby trick—ripping up a newspaper before magically unfurling it back into one piece. He performed it in Tokyo in 2009 and at a lacrosse convention in 2010 and probably scores of other times at scores of other speaking engagements.

He did it again his week while giving a motivational speach to the University of Texas football team.

Look, if you were to watch every video I linked to a paragraph ago and the video I embedded just above this graf, you’d start to see a pattern. Holtz tells the same jokes (“The comics page are for people who can’t read, the editorial pages are for people who can’t think”), he provides the same motivational speech when he’s ripping up the paper (“People are going to tear you down”), and he provides the same humble post-trick banter (“I heard him ask, ‘How did he do that?’ Perfectly, I thought”).

But damn if Holtz isn’t charming when he’s doing it.

You can find theories all over the place on how Holtz pulls off the trick, but because it seems so simple and it… well… ruins all the magic, I won’t link to them here.

But for some of the negativity Holtz gets for his analysis—and, from personal experience, the way he sometimes treated the press—you have to say that he pulls off this track flawlessly and to well-deserved applause.