Looking for love on AOL’s member directory: Online dating in the ’90s 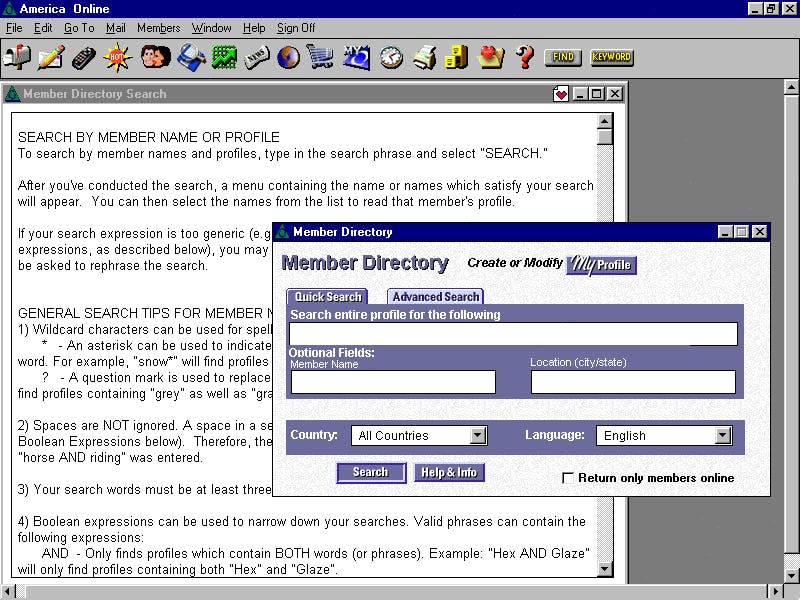 In the late 1990s and early 2000s, almost everything from relationships to cyber-stalking could be traced back to this three-letter, double-slash term. The letters stood for “age, sex, and location” and served as a gateway to whether or not a complete online stranger was worth talking to.

Well before Match.com, eHarmony, and OkCupid came along, the world of online dating was firmly entrenched in America Online. Casual real-life acquaintances and, of course, utter strangers could treat the system as a virtual singles bar. The only things missing were the overpriced drinks and the crippling awkwardness.

My friends, who I love to death, sadly have the social skills of box turtles. During college, we would go to nightclubs, bars, supermarkets, etc. with the intention of hooking up, but we never made it there. Unless people were serving us food or drinks, we avoided any interaction with the sea of unfamiliar faces.

Instead, we would find a table—or, barring that, a relatively comfortable patch of wall—somewhere in the extreme rear of the establishment. We stood there, ogling people from afar, like dorks forced by their parents to attend a high school dance. And we got confused, even angry, when no women broke away from their outgoing friends to come talk to us.

Online, however, the playing field was far more level. 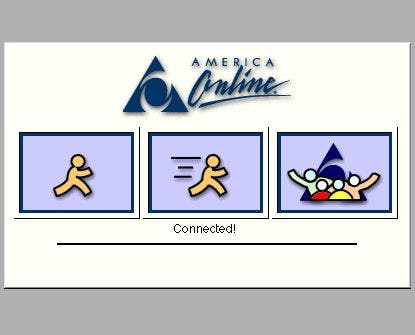 The anonymity provided by the computer screen and the ability to delete the “wrong thing to say” were distinct advantages. Every single screen name out there was a potential love target.

What’s more, the AOL Member Directory was perfect for silent stalkers like me. The directory served as an online profile, allowing AOL screen names to flesh out what was behind the random assortment of words and numbers. Using the directory, one could easily share his name, age, interests, and inspirational quotes. (Inspirational quotes—online? Imagine that!) Before a target even knew that I existed, I was the one to decide if she was worth a hello.

Granted, it usually didn’t take much for me to message someone; back before Seth Cohen was a heartthrob and nerds ruled the world, we were desperate creatures. I’d glom onto anything and run with it if it meant a reasonably attractive girl would talk to me without first receiving some sort of online payment.

Using this method—and the gobs of free time I had on my hands—I messaged virtually everyone with two X chromosomes in a 25-mile radius of my suburban Philadelphia home. Occasionally, “A/S/L?” would be met with no response at all. Other times, the number popping into the “A” category would cause me to type “sorry” and quickly close the window before Chris Hansen popped into the room.

Sometimes I’d get a response that would go somewhere. But then another, tougher obstacle would present itself.

AOL’s Instant Message feature used to have a command titled “Direct Connect” that allowed you to share pictures, music, (very choppy) video clips, and other non-text images with another person. Activating this feature would cause a line of command dialogue to appear in the IM box, indicating to the other party that the lines were open.

Nine times out of 10, the exchanges would go like this.

Translated, this means that she received the best photographic representation I had of myself at the time and responded by immediately ending our communication and blocking me.

Every once in a while, however, a girl would be satisfied with my stats and my pic, and we would begin to chat regularly. Through a series of hastily written, typo-ridden messages, we’d slowly get to know each other.

While it wasn’t expressly stated, especially early on, we both knew that it was building toward one inevitable line: 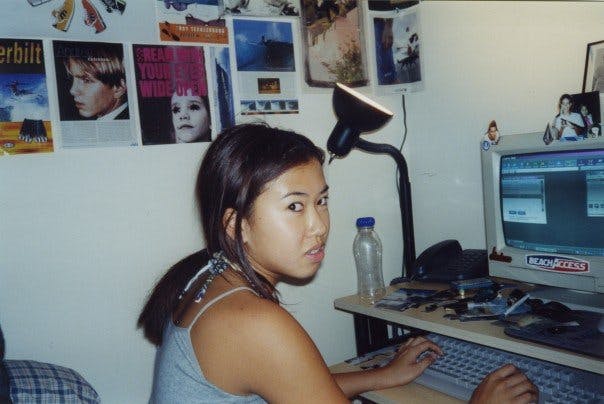 Many girls opted never to leave the safety of our IM boxes. Others agreed that a flesh-and-blood exchange with far fewer emoticons was a logical next step.

Somehow I managed never to get hacked to pieces with a rusty hatchet.

My navigation of the AOL-powered singles scene never netted me a romantic relationship. But it did score me a few dates, one or two makeout sessions, and even some lasting friendships. I’ve known one woman for close to 15 years now, even though our fingers outnumber the amount of in-person interactions we’ve had.

Of course, I won’t bore you with the happily-ever-after stories. We both know that the true gold lies in the times that didn’t go quite so well. 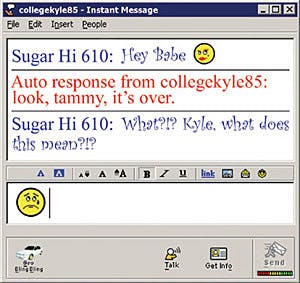 “Jenny” wanted to meet at the most romantic of spots: in front of a local 7-Eleven in Ridley Park, a working-class suburb of Philadelphia that featured sweeping views of the nearby Chinese take-out restaurant. I obliged and met up with her and one of her friends. For about an hour, we stood there, making small talk in front of a suburban convenience store like we were characters in a Richard Linklater movie. She gave me her phone number at the end of our outing. Someone by the name of “This number has been disconnected” picked up the phone when I went to call her the next day.

“Kim” and I made a plan to see the cinematic classic Swimfan. At the theater, I learned that IRL Kim was about 30 pounds heavier than AOL Kim. Additionally, her hair was shorter than even mine, a far cry from the flowing locks that covered the shoulders of whoever the person was in her picture. My immature 22-year-old self was disappointed, but I wanted to make the best of the situation.

Amazingly enough, she wore her own air of disinterest the entire time. During the movie, she received an “emergency phone call” that ultimately cut the date short. When I got home, her Away Message read “Thank you, Jessica, for getting me out of that awkward situation!”

“Emily” wanted to do nothing more—and I seriously mean nothing more—than have me drive around her tiny, working-class town in New Jersey. No movies. No restaurants. Just a two-hour-long drive to nowhere. Adding to the drone, confusing activity was the fact that it basically took up the majority of our in-car conversation. I have never heard the term “OK, turn left here” used so much on a date in my life.

A lot has changed in the 15 years since AOL’s inadvertent foray into the romance department. Actual dating sites have clarified users’ intentions, the lack of anonymity has made it more difficult to troll, and the concept of a dangerous Internet has been somewhat saturated.

The actual concept of online dating, however, has still remained the same. Being in an appropriate age range, sharing interests, and communicating on a similar vocabulary level are still the tricks of the trade. And just like in 1998, if it doesn’t work out, you can just head back out to the bars.

I’ll be at the second table on the left, all the way in the back.