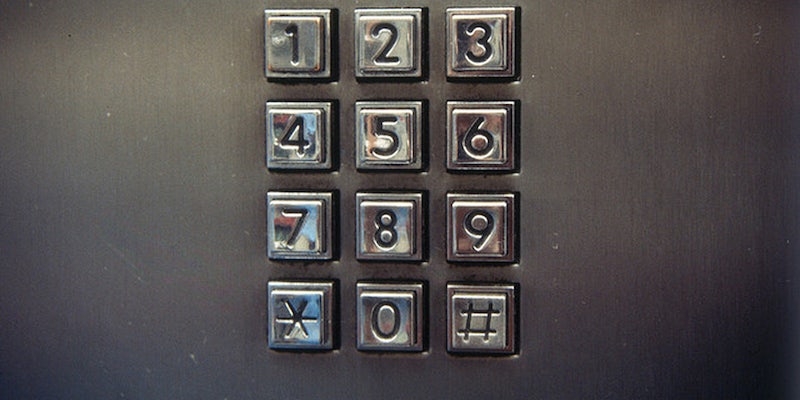 History's finest phone troll has been around since the '80s—and he's still going strong.

That’s what social media has wrought on modern humanity. All we want is affirmation. It’s a poison we may never recover from—which is why Longmont Potion Castle may be the last true artist on the planet.

Longmont Potion Castle is a pseudonym of an anonymous troublemaker who’s been active since the late ’80s. Simply put, he is the most transcendent crank caller in history. He has put out 12 albums, either self-released or promoted through various independent hardcore labels, all full of the most bizarre, surrealistic material you will ever hear.

And he does it all without screaming, shouting, or racially antagonizing his victims, like the Jerky Boys or Ownage Pranks do. In fact, Longmont hardly raises his voice at all when he’s going about his business. Instead he presents inscrutable queries, uncanny phrases, and otherworldly voice modulation to create a truly singular listening experience. A few minutes on the phone with Longmont, and you’ve entered wonderland.

Look, you’re not going to understand until you hear it. So let’s get started. Here’s  a textbook example of a Longmont Potion Castle crank:

I don’t want to over-explain what’s going on here, because putting description to this stuff distracts from the genius, but I’ll say that this video begins with Longmont telling a poor clothing store clerk that he wants to be outfitted like a “swamp donkey.” It only gets more insane from there.

Most prank callers go for the lowest common denominator, letting the joke die a quick, shallow death; Longmont bamboozles the people he calls until they’re forced to say things like “No, we don’t have any holographic boots.”

Earlier in his, um, “career,” Longmont didn’t use the voice modulation you’re hearing on the videos above. He’d just play his very dry, very weird character. There’s some debate amongst the Longmontians on whether the post-modulation or pre-modulation calls are superior, and generally I side with the former. However, when you go back and listen to “Clown Motel,” in which he repeats that he needs to rent out three rooms for him and “all his weights” until the front desk staff loses their minds, it becomes clear that Longmont didn’t need any gimmicks to tear the house down.

The trademark Longmont Potion Castle prank involves him posing as a UPS delivery man and telling an unsuspecting soul that he has a couple hundred pounds of sod/sand/lumber/cables/miscellaneous stuff, and that the delivery is C.O.D. These are great, mostly because they occasionally involve pranking someone famous. Like, say, Alex Trebek!

If I had to choose my favorite of these, however, it’s probably “Nash,” where a music store cashier gets so befuddled it borders on high art.

A close second would be “Turtle Pleasure.”

There aren’t many people keeping it this real anymore. As I mentioned, Twitter has revealed us all to be money-grubbing sycophants doing tricks for gold stars. But Longmont Potion Castle gives me hope. Here’s a guy who’s stuck to his anonymous guns for three decades, releasing the most punk rock prank phone calls that have ever been recorded. He’s a legitimate inspiration, and it’s about time you paid your dues.