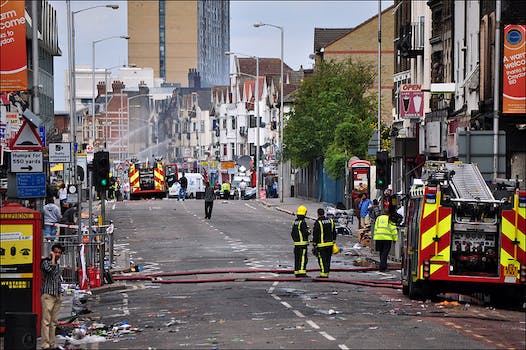 The riots that have brought parts of London to a standstill entered their fourth day today with no end in sight, as violence and looting spread to other cities, including Liverpool, Bristol, and Birmingham. And those caught in the storm are taking to the Internet to tell their stories.

The rioting began as a peaceful protest over the death of 29-year-old Mark Duggan, who was shot and killed last Thursday by London’s Metropolitan Police Force.

Social news site Reddit is quickly becoming an excellent source for first-hand accounts of breaking news, as we reported yesterday. Like Twitter, it’s a readily available outlet for personal storytelling. But, fostered by discussion and the high value the Reddit community places on detailed eyewitness reports, these narratives reach a level of depth impossible in 140 characters or less.

The site featured dozens of first-hand accounts after redditor tintu_mon asked Londoners to share their experiences.

We’ve collected a few of the best below. But be sure to click through each and read the full discussion.

Let’s make one thing clear—this isn’t rioting, it’s looting. Plain and simple. There is no longer any grievance being addressed, people are simply exploiting an opportunity to steal, damage and destroy with impunity.
I’m in Notting Hill, and last night diners in a restaurant were mugged, shops broken into, and buildings set on fire. It had absolutely nothing to do with the communities in East London other than that the police were there, and not here.

I was in Clapham at the time of the first car fires, I was coming home from the gym with a few of my mates, then I saw a load of dickhead criminals running my way. I managed to video tape most of their faces (ive sent to the footage to the police) then me and my mates were taking all of the injured people out of harms way (to the local park), getting people out of fires. Waiting with them until the ambulances came (which took ages)

I am a Medical student and I was on my way home from a day out when I got caught in the middle of it all around 6PM. I was luckily on scene before paramedics and was able to treat someone who had been stabbed in the kidney and was thankfully able to stop the bleeding with my coat.

The guy is now in hospital but I don’t know the full extent of his injuries. I then volunteered my help at a local hospital (9PM) to help with the massive influx of patients. I am only now (8.30AM) getting home and contemplating heading out for the riot cleanup in my local area.

Edit : Off to help with the clean-up in Croydon!

tiny_painted_lady:
I live in Streatham, South London. Was up until three sat in the dark listening to the radio and the sirens. My partner and I were out in the car at about 9.30pm and we couldn’t hardly get anywhere for road closures and police, we ended up going past a big retail park with a huge PC World and Currys, and there were people everywhere carrying as many laptops abd TVs as they could. They were just running out in the road, and to be perfectly honest I was shitting it, they were so intimidating.

My friend and her fiancee are on their honeymoon in London, and while eating at a restaurant there, were interrupted by looters who took many of their belongings. This sadly included her wedding band and engagement ring. The staff at the restaurant tried their best to fight off the looters, and keep patrons safe. Patrons were eventually ushered into the wine cellar for their safety.

A friend owns a car stereo store. My husband and his friends have plans to stay in the shop tonight, barricading themselves in and armed with subwoofers and swinging malfunctioning GPS units stuffed in socks (or something) to defend it. They can’t afford the damage or the loss and from what we’ve seen so far the area the shop is in could be next on the list.
Liiittle bit scary.

They attacked the local Sainsbury’s :(
There were clumps of ash/coal on the streets around my house this morning. A Jeweller’s down the road was ransacked.
I’m supposed to be going to a self defence class on the high road tonight. Looks like I might be putting my class to use on the way home…
Somewhat scared.
O.o