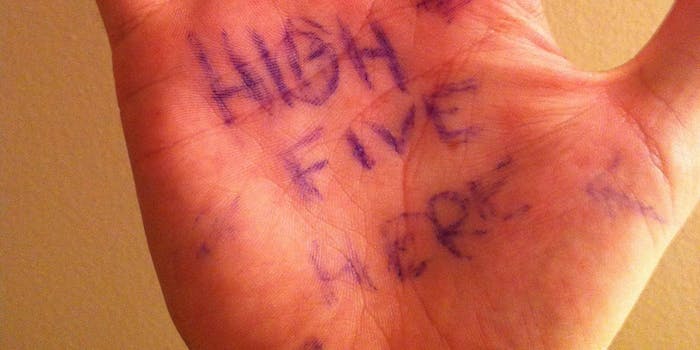 That's one way to make a footrace less boring.

There’s really no dicker move than the denied high-five, which is why it’s always so hilarious.

And this dirtbag kid might just be the master of it. At the very least, he found a limitless source of victims to practice on. He chose to stand by the bus stop and see how many runners he could dupe during yesterday’s London Marathon.

This little shit is a legend #LondonMarathon https://t.co/kb2xJwSKw4

After all, when better to catch people than when they’re feeling that endorphin high? They’ve been receiving unending praise from friends, family, and coworkers for running a marathon in the first place, so maybe he considered it his duty to take them down a peg.

Sam Swann, who posted the video, called the kid a “legend,” but not everyone was as amused.

Wow. Punching a kid in the face, because he faked you out with a high-five seems a bit extreme. Sounds like you might need a better way to deal with your stress. Have you tried running?