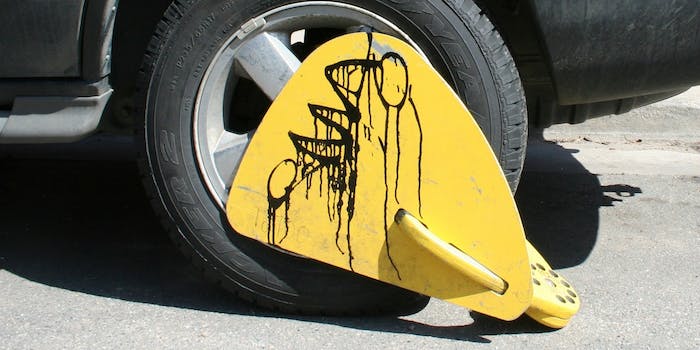 Did he not notice all the crunching sounds?

You know what can ruin your day? Walking out to your illegally-parked car and discovering that somebody with some kind of authority has placed a wheel clamp on one of your tires, effectively disabling the vehicle.

And if that happens—if you find that your car is sporting a shiny, new boot—don’t try to drive on it, for goodness’ sake, because you might end up destroying your entire wheel. Apparently, this is not a lesson that everybody has been taught. (Warning, some hilarious NSFW language.)

As the blog Arbroath explains, the driver of the minicab was parked in a restricted zone outside the Park Tower hotel in London. Wardens spotted the vehicle, attached the clamp, and left a sticker on the windshield.

The amazing thing is that 1) the driver kept hitting the gas, reversing it, and hitting the gas again (seriously, did he not notice the earsplitting crunching sounds?) and 2) it appeared for a few moments that the clamp might simply fall off and allow the driver to make his escape, which would have surely amazed the guys filming the video, who were calling the driver a “knob,” a “prick,” and “an absolute dickhead.”

Still, that reminds us: Not everybody in London can be as smooth as this guy. Or as determined as Homer.