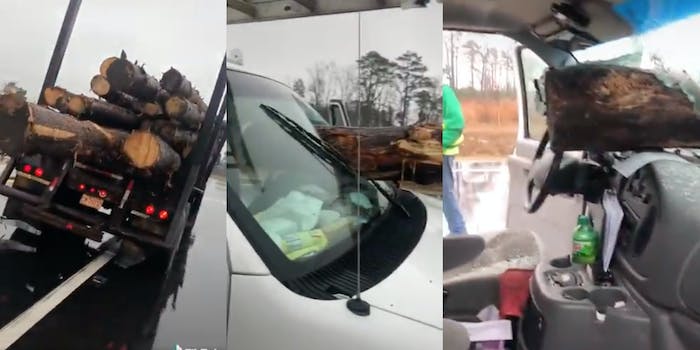 'You’ll NEVER catch me chilling behind one of these log trucks.'

A viral TikTok featuring a wooden log piercing a vehicle’s front windshield is evoking a scene from Final Destination 2.

The video, which was filmed in the aftermath of the accident, shows the giant log in the windshield of a white van as a transport truck with several similar logs on it is pulled over in front of it. The log appeared to have gone directly through the center of the windshield, seemingly missing both the driver and passenger’s seats.

It was posted by TikToker @alow420 on Friday and has been viewed over 2.3 million times since. It eventually made its way to Twitter, prompting “Final Destination” to become a trending topic throughout much of Saturday.

In the scene from the early 2000’s horror flick, there is supposed to be a deadly pileup spurred by the fallen logs on a highway. The incident is prevented by one character’s premonition, kicking off the whole premise of the film: Everyone who cheated death on that highway ends up dying in freaky ways.

People on Twitter are assuming the driver of the white van had never seen the film because if they had, viewers say, they wouldn’t have been driving behind the transport truck in the first place.

“Clearly it wasn’t a millennial driving we all watched final destination 2 and know better,” another said.

“Had to have been a boomer driving,” a third assumed. “No millennial would ever drive behind one of these cus of Final Destination.”

But that doesn’t appear to be the case.

Whatever the case may be, the clip is having viewers swearing off driving behind log-carrying transport trucks all over again.

“I watched Final Destination. you’ll NEVER catch me chilling behind one of these log trucks,” one tweeted.