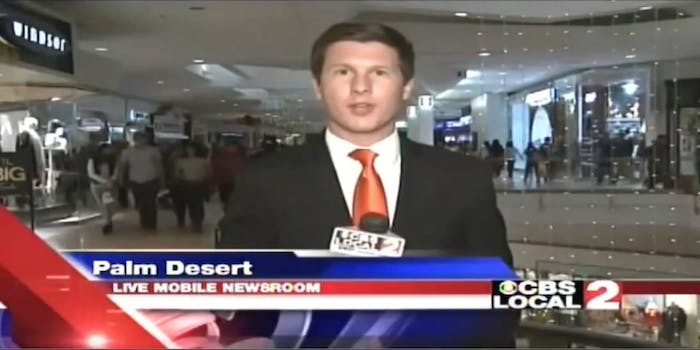 TV reporter has the perfect comeback for this heckler’s lewd, played meme

Interrupting with “fuck her right in the pussy” became a popular meme during 2014, after filmmaker John Cain uploaded a news blooper to YouTube that was later debunked as a staged incident, which he’d followed up with several other fakes in an effort to sell T-shirts.

But people yelling the phrase really did catch on, and the meme was kept strong for about a year. And now, at the close of 2015, a last gasp. Unfortunately for the person yelling the crude phrase, reporter Joe Galli was ready with an immediate comeback:

No, the comeback isn’t the most inventive, but it’s done with such speed, and the incident is so quickly forgotten and moved on from, that Galli’s response to a FHRITP bomb is downright admirable. It doesn’t appear that Galli was fired for his response about the heckler’s mother, but this particular piece of live Black Friday coverage was, unfortunately, left on the cutting room floor for the station’s later-aired edited segment, which includes Santa Clause telling Galli that, from what he’d seen at the mall, “everybody [was] polite.”

The heckler’s mother has yet to respond to Galli’s allegations.