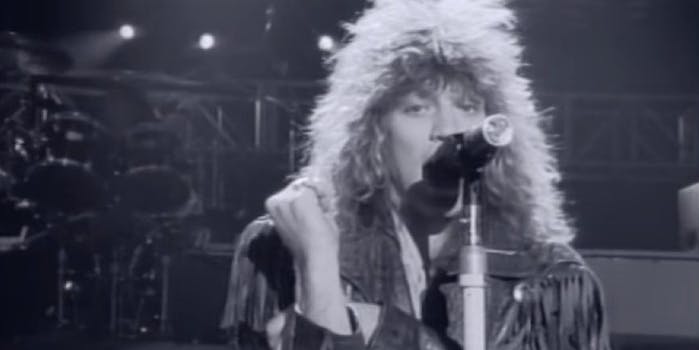 Twitter has been taken over recently by a very particular visual pun based on the 1986 Bon Jovi hit “Livin’ on a Prayer,” beloved for its wub-wub verses and whoa-oh refrain. Want to know how it works? We’ll give it a shot.

The meme starts with the first part of the chorus: “Whoa, we’re halfway there! Whoa-OH …”

But instead of “livin’ on a prayer,” there’s a photo of something that rhymes with it and has the same cadence. A lemon on a pear is easily the most popular version:

But there’s also wizard at a fair:

Lipstick on a pear:

Piven on a bear:

And Liv in underwear:

The joke format isn’t entirely new. “Chicken on a bear,” in the tradition of Animals Riding Animals, was done more than a month ago on imgur:

But the Twitter iteration of the joke is new, seemingly starting with this “lizard on a chair” tweet from Periwinkle Jones (whose Twitter bio now reads “stop sending me variations of that lizard on a chair joke.”)

It’s a cousin to the “roses are red” meme, where an image (usually a headline or YouTube video title) completes the old poem, but it’s slightly harder to pull off. A “lizard on a chair” punchline is entirely visual and relies on the viewer to suss out the pun, making it both higher-risk and higher-reward.

Just realize that it also offers a smaller rhyme and meter space to work with, and the good ones have mostly been done at this point. This meme is good, but it’s already halfway over.