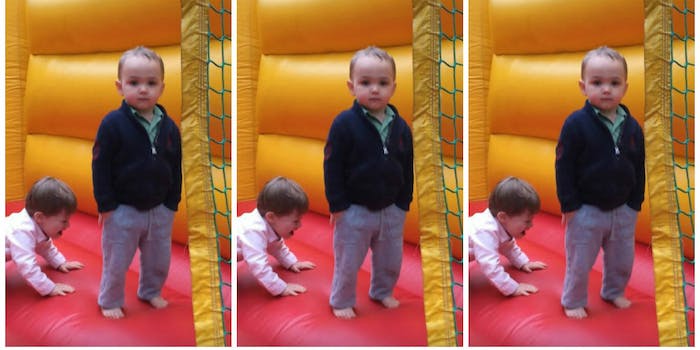 Could he be any more chill?

When you’re a little kid, it’s almost impossible to contain your excitement in three distinct places: when you enter Disney World for the first time, when you take off in an airplane, and when you get to hop in a bouncy house.

But for the cool little boy in the video below, it’s like he’s made a career of gallivanting in bouncy houses. The little dude has seen it all, whether it comes to bouncy castles or bouncy spaceships or, um, bouncy hamburgers. Give him somewhere to bounce, and the tyke is ready to dominate like no other 2-year-old before him.

Donning a sharp outfit and casually placing his hands in his pockets, this young child bounces despite all the obstacles around him—the camera in his face, the inexperienced kid next to him who can’t keep his balance, and the incessant chitter-chatter from those around him.

He stays in his lane and never stops jumping. But it comes naturally to our hero. It’s because he was born to do this. The trending YouTube clip is headlined, “I will never be as cool as my 2 year old nephew in a bounce house.” In fact, none of us will. He’s a chill bouncy house master, and he’s the coolest little kid in all the land.