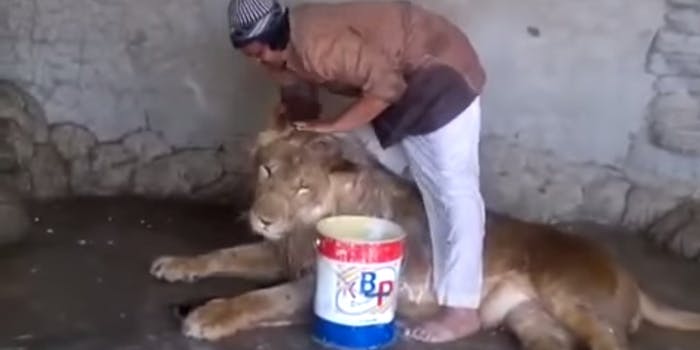 What it’s like to give a lion a bath

It's downright incredible he doesn't get mauled.

It’s no secret that cats hate getting baths. Unfortunately, it’s a necessary evil—especially if you are the king of the jungle.

A YouTube video currently making the rounds showcases one man who has the seemingly unsafe task of taming the mane of a full-grown lion. With the animal far too big for a kitchen sink, he is forced to slather it with soapy water from an industrial-sized bucket.

It is downright amazing how many times the man simply pushed the lion down and did not get mauled. In fact, the lion appeared to enjoy it, reveling in what it felt was playfulness.

Maybe this brave soul will offer to bathe possums next so that they can stop invading the showers of campers.