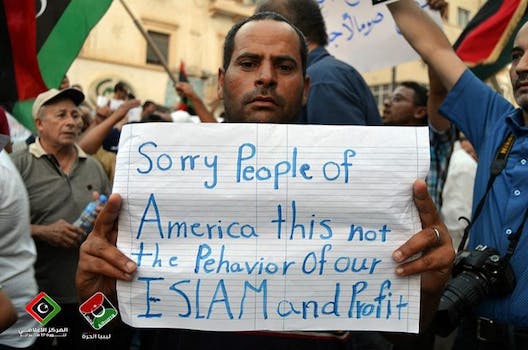 Libyans use social media to apologize for embassy killings

Libyans are taking to Twitter, Facebook and imgur to spread the message that the militants who killed U.S. ambassador Chris Stevens don't represent them.

When the U.S. Ambassador to Libya was murdered yesterday at the U.S. consulate in the city of Benghazi by a group of militiamen, Libyans took to the Internet to register their regret, grief, shame, anger and disapproval.

Using Facebook, Twitter, and image sharing site imgur, they praised Ambassador Christopher Stevens for his investment in the Libyan people and the integral role he played in the American response to the Libyan uprising, which toppled the country’s autocratic leader, Moammar Gaddafi.

They also sent their condolences for the other Americans killed in the raid by a group of ultra-militant Islamists, and to the Libyan embassy workers and others who struggled to help the victims, some becoming victims themselves.

The outpouring of emotion began with photographs of an anti-terrorism rally in the city of Benghazi, where the ambassador was killed. They were posted by the Libya Alhurra Internet TV network, an outfit that began at the outset of the Arab Spring. These images showed ordinary Libyans carrying signs in both Arabic and English. One of the most affecting was a middle-aged man carrying a misspelled sign that said, “Sorry People of America this is not the Pehavior of Our ISLAM and Profit.” If anything, the misspellings made the sentiment even more poignant than it would have been otherwise.

Other signs said, “R.I.P. Christopher Stevens,” “Chris Stevens was a Friend To all Libyans,” “Thugs and killers don’t represent Benghazi nor Islam,” Benghazi is against Terrorism” and, in Arabic, “No to al Qaeda, no to violence, this is a youth revolution” and “No No No to Al Qaeda.”

The condolences also mounted on Twitter, including this tweet from Hamid @2011feb17, directed at the U.S. Embassy: “Words seem inadequate to express the sadness I feel right now. Pls accept my sincere condolences for your loss.”

The messages seem to fall into several categories: condolences for the loss of Ambassador Stevens and the other Americans, a sad pride for the Libyans who died defending them, a strong dismissal of violence and terrorism, and news surrounding the event.

One of the more interesting developments is the creation of The Sorry Project. It was launched within hours of the attack by a man named “Sufian,” his friends and fellow activists, and quickly gained support from the Libyan Youth Movement.

Sujian told the Daily Dot this morning that “the aim is to get no less than a 1000 (apologies) from Libyans, using this as if (it were) a petition signed by the Libyans showing that we oppose the attacks. Hopefully, we will be able to make this reach the people in the States and Chris and the other three workers’ families.”

“The idea came around,” continued Sufian, “when I was thinking what would the most proper way to at least show the family of Chris and (the other embassy) workers and to the American people our condolences and regrets and apologies. The original idea was to make a three minute long video containing short cuts from everywhere in Libya saying sorry for Chris and his family, which we are working on. The other part of the idea was to give the Libyans a chance to make their voices heard by the Americans.

“Now on this (Facebook) page we have Libyans and Americans condolencing each other. The Libyan people are civilised and they do oppose the killings. This project is just a idea to allow the Americans to look at how we really think and show our sorrow and gratitude for Chris and his great work here.”

More protests against terrorism are scheduled across Libya, as well as consulate cleanup and fundraising and other activities. It seems likely that, as widespread as the use of social media is among concerned Libyans, their use of it to honor Ambassador Stevens and condemn violence in the name of God has yet to peak.

As for America, the image of the “Arab street” as one full of slavering madmen cheering the destruction of the World Trade Center is remarkably enduring. This appalling image results in a reductio ad absurdum that is difficult for even engaged and educated persons to shake. We forget that each block of every street in creation contains the whole of the world, good and evil, both and neither. Waves of violent, nominally Islam-based protests that wash across the Muslim world with some regularity, such as the current protests against an obscure film, help keep that image fresh.

However, this outreach by Libyans via the online tools that have become increasingly available to them and to which they have taken with the hunger of a previously cloistered people to communicate has the power to overwrite the tyranny of the easy image and replace it with a deeply textured, three-dimensional picture, one that more closely matches the complexity of the real street we all live on.