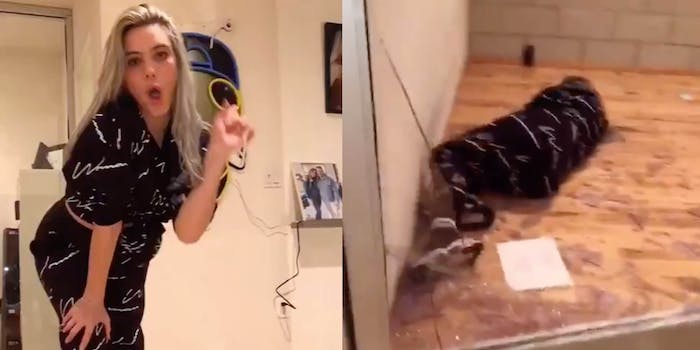 The comments got vicious.

Lele Pons maintains a strong following on Instagram, Twitter, and now TikTok. But her latest video may have tipped the scales out of her favor after it urged Twitter on Tuesday to dredge up the many controversies the social media star has been involved in over the years.

Back in the days of video-sharing app Vine, you would’ve been hard-pressed to find a more popular creator. Before the platform’s fall, she leveraged that viral success into hefty followings. Since Vine’s demise, Pons has been hard at work bringing the same zany humor to her Instagram and now, TikTok.

Over the last several months, the 23-year-old’s TikTok follower numbers have skyrocketed. She has more than 8 million followers on the platform and her page has earned 114.5 million likes.

In her latest video, Pons performs a short dance to “Culo” by Jose De Las Heras and Ghetto Flow. Mid-way through her performance, she appears to waver and tumbles backward, crashing through a nearby glass door. A few people thoroughly enjoyed the stunt, but the vast majority of internet users expressed their overall distaste. The pushback made her a trending topic this morning.

“I need someone to give me the lowdown on what happened with Lele Pons,” Twitter user Rob Gavagan wrote. “Aside from the fact that she’s painfully unfunny and a HORRIBLE person in real life to people who can’t help her career.”

Soon, tweets touting similar sentiments were all over the platform. “Y’all had to remind me Lele Pons exist,” one user wrote. “Thanks Twitter.”

Some people took the opportunity to dredge up some old Pons drama. “This the same girl who posted a picture holding extensions claiming she had cut her hair off to donate for cancer,” one person wrote. “It’s been ‘fuck Lele Pons’ since then.”

The tweet refers to a July 2017 scandal. Pons posted a photo to social media claiming that she had cut her hair and intended to donate it to charity. Eagle-eyed fans quickly discovered, however, that the sheared hair in the photo was fake. It appeared that Pons had used extensions to stretch the truth about her charitable contributions. She later tried to explain away the situation.

Pons was born in Venezuela and leans hard on her claim to Latinx identity. But the community on social media jokingly pushes back.

“As a Latina we do not claim Lele Pons,” one user said. “The Latinas are kindly passing her to the Caucasian’s.”

Others brought up an embarrassing incident from 2017, in which Pons met Taehyung, one of the members of popular K-pop group BTS. After her brief meeting with the South Korean star, Pons reportedly requested his number. According to dozens of posts online, rather than outright refuse, Taehyung gave Pons his manager’s number instead. “Remember when lele pons asked for taehyung’s number and he threw a huge ass curveball and gave her his manager’s number instead,” one person wrote.

Many users seem finished with Pons’ staged humor—but it doesn’t seem to be doing anything besides signal-boosting her work.