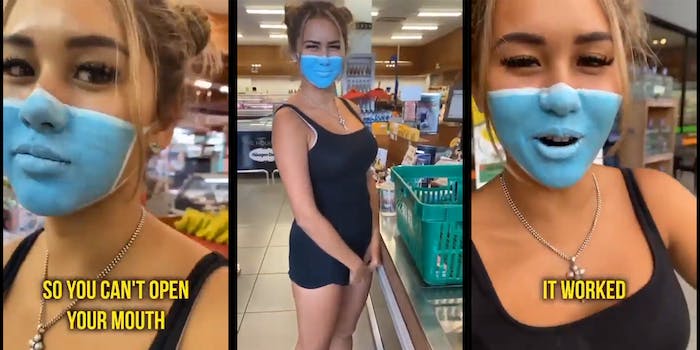 Russian influencer Leia Se was deported from Bali after blatantly disregarding COVID-19 safety measures. Rather than mask up like the rest of the world, Se’s companion, YouTuber Josh Paler Lin, uploaded a video of Se flaunting Indonesia’s masking requirements via some creative face paint.

The video went viral on several social media channels a few weeks ago, stirring outrage among viewers. It sees Se and Lin approaching a grocery store on the destination island, only to be turned away because Se “forgot” her mask. She and Lin, who has found popularity on YouTube thanks to his prank videos, then return to the car and begin the process of painting her face. Using blue and white face paint, the duo mimics a disposable face mask over Se’s mouth and nose. They even add straps around her ears, to ensure it looks real.

When they return to the store, the security guard is fooled. He allows them in to wander the aisles, thoroughly pleased with themselves, even as other patrons shoot them confused looks and eye Se’s mandate-flaunting face paint. The duo giggles to themselves over their successful dismissal of other human lives, managing to complete their shopping trip—with only a few questions and confused looks—before the video concludes.

But Indonesian authorities caught wind of the video after it went viral on social media. The country has struggled to keep COVID-19 case numbers low enough to safely reopen to tourism, an economic necessity in Bali. Indonesia currently has the highest number of COVID-19 infections in Southeast Asia, according to data from Johns Hopkins University. The country has suffered more than 1.7 million cases and 46,663 deaths.

After tracking down Se and Lin, Indonesian authorities interrogated both and tossed Se in detention. Ultimately, it was determined that she would be deported back to Russia. Typically, Indonesia’s mandates allow for two strikes against a foreign offender. The first usually comes with an $89 fine, and the second leads to deportation. In Se’s case, however, authorities made an exception. They felt her clear and purposeful disregard of safety measures warranted an immediate removal.

“We won’t tolerate anyone who violates the health protocols to keep Bali safe,” Bali Gov. Wayan Koster said. He also noted that it was the third prank post violating local health protocols Se had participated in during her time in Bali.

The decision from authorities prompted an apology from Lin and Se, albeit too late to stop Se’s deportation. Lin, who entered the store with a mask in place, despite his participation in Se’s prank, was allowed to stay. Se was deported back to Russia this week.

Before appearing in court, the duo uploaded an apology video to Lin’s Instagram page. They are flanked on either side by lawyers, who help them apologize and explain their actions. Lin notes that he “made this video to entertain people,” because “I am a content creator and it is my job to entertain people.”

He goes on to say that the video was in no way intended to encourage people to disregard Bali’s masking requirements. It ends with encouragement from both Lin and his lawyer for people in Indonesia and Bali to “always wear masks for our own safety and health.”

At least all the face masks were real this time.