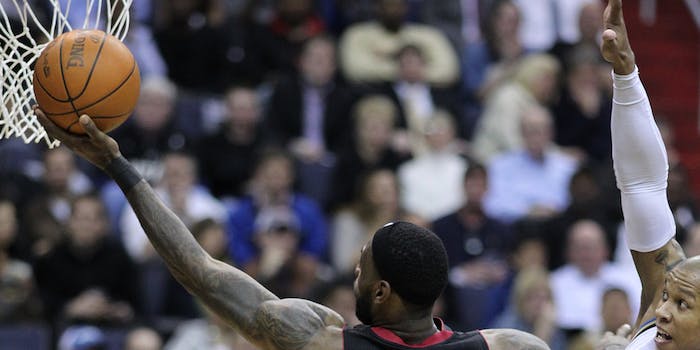 The GIF artist who showed the world just how amazing Texas Rangers pitcher Yu Darvish really is takes his talents to South Beach.

Drew Sheppard, who goes by Dshep, has created a composite GIF animation of each of LeBron James’s 12 field goals from Game 7 of the NBA Finals Thursday between his Miami Heat and the San Antonio Spurs. Sheppard, 27, produced the GIF for Yahoo Sports and posted it late Sunday night to Reddit’s r/GIFs community, where it’s collected more than 360 comments.

“DShep is coming to the world of basketball?” bob_saget_enthusiast commented. “This is awesome.”

The process for creating the James GIF was very similar to those he did of the MLB.

“The very basic effect of combining a handful of provided pitches reasonably well is rather simple and could be done in half an hour,” Sheppard told the Daily Dot. “But the entire process including locating the right clips, various refinements, masking tweaks for the particular image, accompanying articles and supplementary GIFs that I’ve been doing for FanGraphs to offer proper context has thus far taken pretty good chunks of time.”

The first GIF to put Sheppard on the map was that of Yu Darvish. After posting it to Reddit in late April, the GIF collected millions of views and even received some attention from NPR. It also helped Sheppard land a gig with FanGraphs, a baseball statistics website.

“I really enjoyed comments by non-baseball fans who said it gave them better appreciation of the skill of pitching,” Sheppard added. “I’ve always thought that the duel between a hitter and pitcher was among the most fascinating things in sports and something that a lot of viewers who may dismiss baseball as dull have been missing out on.”