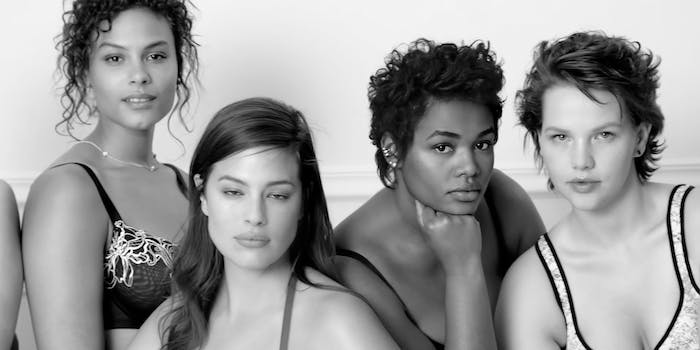 Why plus-size ads for women keep getting it wrong

Anyone who has casually flipped through a fashion magazine or watched a lingerie commercial recently is likely familiar with the painful lack of healthy and diverse images of women’s bodies in the media. So it’s no surprise that when Lane Bryant launched its bold new campaign for its Cacique line of lingerie this week, the announcement was much greeted with widespread applause on the Internet.

This is amazing! About time average sized women were on a billboard! #ImNoAngel pic.twitter.com/DqW5sfFx1m

There was also a fair amount of criticism, as some pointed out that the ad seems to pit women with fuller bodies against those who are slimmer.

I strongly dislike the term 'Real Women'. All women are real. Body shaming has got to stop. Curvy or slender, you're real. #ImNoAngel

Disappointing the #ImNoAngel campaign has to tear down the way other women look to prove a point or boost their own self esteem.

My biggest concern is that as women, we need to learn to stop repeating history. Pitting women's against eachother won't work. #ImNoAngel

While I wholeheartedly agree that it’s exciting to see a diversity of shapes and sizes entering the mainstream media, I was a little shocked at how quickly many congratulated Lane Bryant as a champion of progress. Mic.com proclaimed that the ad proved “sexy knows no size” and over at Independent Voices, Louise Scodie praised the ad for showing “actual bodies.”

Shot in black and white, the commercial portrays models of a full-figured but rather uniform body type wearing lacy intimates while coyly laughing, shimmying, and offering their thoughts on what’s “really sexy.” One offers, “I think it’s in my eyes,” while another casually gestures to herself and says, “Something that looks like this.”

The overall tone of the ad is easy but sensual, and the confidence the women exude is certainly exciting to see—that is, if the viewer assumes full-figured women typically lack confidence.

The ad culminates in a chorus of voices repeating “I’m no angel,” an obvious reference to the “other” models, the waifish ones we’ve come to expect from viewing too many Victoria’s Secret campaigns. The remark is sassy and defiant, and I can see how some might read it as empowered. But ultimately, the ad positions women as objects of desire competing with other objects of desire. If our goal is to build a body-positive culture, certainly the last thing we need is competing images of women.

So why are so many applauding the #ImNoAngel ad so wildly? Is the ad truly brave? Or does it simply reinforce the limited role we’ve come to accept for the female consumer?

If we take a look at Victoria’s Secret’s most recent commercial for their new “fabulous” line, we find an ad that is actually quite similar in style.

More pared down than the cinematic and flashy ads the label has come to be known for, the video features a lone model in a matching bra and underwear set, her jeans still closed but suggestively lowered on her hips. She mugs for the camera seductively biting her lip, arching her back and neck, and finally smiles.

Ultimately, these ads have much in common. They are less about women feeling confident and more about women eliciting feelings of desire from others. Lane Bryant’s cheeky #ImNoAngel tagline would have viewers believe the campaign is a departure from commonly restrictive beauty ideals, but in fact, they’re selling us the same raw deal in a different bra size.

Encouraging women to strive to attain the image of zaftig goddess is not necessarily better than selling women the ideal of a waifish nymph. At its essence, the underlying message is the same: Above all, a woman must be desirable. The message, thus, isn’t so much body positive as it is reductive.

In fact, they’re selling us the same raw deal in a different bra size.

The female consumer is routinely cast as less than the sum of her purchases. She is encouraged to buy intimate apparel not so that she can have any personal gain in the form of a pleasurable or comfortable experience when she wears the goods—but rather so that she can, in turn, become a desirable product.

Male consumers, in contrast, are taught that they deserve not only quality, but value. Take, for example, the long-standing tagline of Men’s Wearhouse commercials: “You’re going to love the way you look.” In recent years, the label adopted the phrase, “Confidence suits you.” The delineation between the male consumer and the female consumer is painfully clear. For men, the option to feel good is non-negotiable. Why on earth, otherwise, would a male consumer come to your store? For women, however, access to confidence is always just out of reach.

A recent ad from Men’s Wearhouse promises men a reflection of their individuality in custom-made suits of the highest quality. The narrator asserts that custom suits aren’t just meant “to fit a difficult body type,” rather they are vehicles for creating “your own individuality.”

The ad goes on to explain that what they are selling is not just a suit in any fabric or pattern of your liking, but also “a chance to express your personality.” All of this culminates in a “feel good moment” when you pick up your purchase. This kind of advertising places the consumer in a position of assumed status and power, and those messages are virtually non-existent for women.

For women, access to confidence is always just out of reach.

If Lane Bryant really wants to change the conversation around women’s wear and promote a healthier body image, perhaps they don’t need to sell us any particular bodies at all. What might be really revolutionary, would be to shift our focus, entirely. Instead of resting our gaze on the bodies that wear the clothing and inspecting them for signs of value, why not shift our gaze to the product, and what it can offer us in terms of quality and experience?

True equality and healthy body images will only arrive when we reposition the female consumer so that she is no longer treated as a product but instead simply regarded as a respected customer.