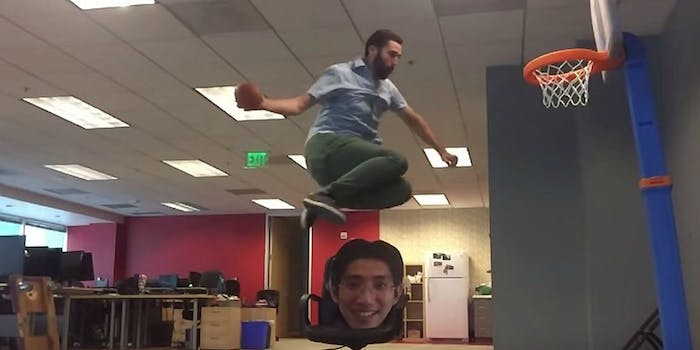 The ending is just about perfect.

What would happen if you were to get laid off? Would you refuse to get out of bed? Start packing to move back in with your parents? Make plans to begin a new, exciting career as a panhandler? Or say “screw it all” and dash off for an impromptu trip to Europe?

Well, if you’re YouTuber Jake H., you record yourself laying down some nasty dunks in your soon-to-be-former office with the soundtrack of Space Jam accompanying you on the video. As he simply states on YouTube, “office layoffs. just me and that 6′ hoop for my final days.”

Luckily, he makes the most of his last hours of employment. And keep watching until the end of the video, because Jake H, perhaps unintentionally (or maybe not), does his best impression of Michael Bolton, Samir Nagheenanajar, and that office printer from Office Space.