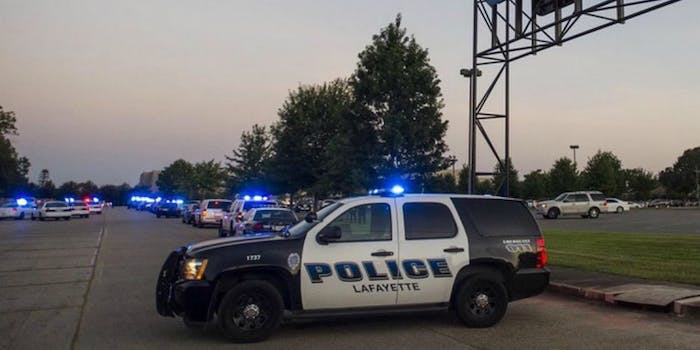 A man opened fire in a movie theater in Lafayette, Louisiana, on Thursday evening. According to police chief Jim Craft, three are dead.

City marshall Brian Pope told the newspaper that the shooter turned the gun on himself after going on a shooting spree at the Grand Theatre. Craft said that seven are injured, from critical to non-life threatening.

Katie Domingue told the Daily Advertiser that she was with her fiance at a showing of Train Wreck when an older white man stood up about 20 minutes into the movie and began shooting.

“We heard a loud pop. We thought was a firecracker,” Domingue said. “…He wasn’t saying anything. I didn’t hear anybody screaming either.”

Craft said that the shooting was confined only to one room in the theater. State police have said the alleged shooter is 58 years old.

Video shown by Alex Labat of KATC TV 3 shows multiple ambulances at the site with victims laying on stretchers and being loaded into the emergency vehicle.

Update as of 7/23, 8:45pm: Police are still working the scene at a confirmed shooting at the Grand 16. From reporter Claire Taylor: City Marshal Brian Pope has confirmed for The Daily Advertiser that six people were injured in a shooting Thursday night at the Grand Theatre. The shooter then turned the gun on himself, Pope said, and is dead.

Condolences from elected officials also have begun to pour in across Twitter.

Prayers for Lafayette at Grand Theater. Talking to state police colonel about shooting in Lafayette.

I'm on my way to Lafayette right now. Please say a prayer for the victims at Grand Theatre and their families.

Bridget and I are praying for the families and friends of those affected in the tragic shooting in #Lafayette.

Said Boustany in a statement: “I’m saddened at the terrible loss of life represented in tonight’s tragic shooting at a movie theater in my hometown of Lafayette. Bridget and I are praying for the families and friends of the victims at this difficult time. I will work with the Lafayette Police Department, local, state, and federal officials to get to the bottom of what happened tonight.”

Photo via the Daily Advertiser/Instagram