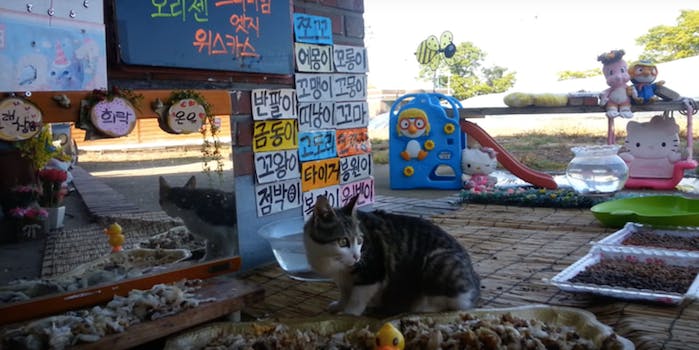 Here comes the purrfect way to kill some time on the Internet.

If you have little interest in watching nobodies thirst for attention on Facebook Live, turn your attention to livestreamed cat reality show Cats Meok Bang. As Dami Lee at the Verge noticed, it’s essentially an IRL version of feline phenomenon Neko Atsume, the kitty collector game.

Koo Eun-Je, of South Korea, is the man behind the show. He started the livestream channel so he and his wife could watch the stray cats that he helps feed. Apparently there are up to 17 cats on some days, and at other times there’s just one.

Soon enough, other people were tuning in to watch the cats visit the little kitty camp and chow down. And now viewers have begun to send in cat food and other donations to help keep the show going.

While you may not be able to pet or interact with the kitties, you’ll surely take joy in just watching them show up and hang out—much as with Neko Atsume.

Unfortunately the livestream is only available in Korea at the moment, but there’s no shortage fan-uploaded highlights on YouTube.