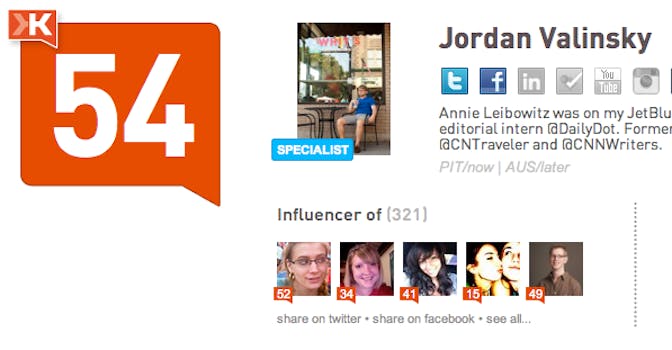 The announcement struck a nerve with some Twitter users and critics who appear to be confused about what the San Francisco-based company really does.

Tweeter Beth Carpenter declared today “Klout Bashing Day” and quoted one of her friends saying “At this rate, why don’t they just pull in your Words with Friends score?”

Another user, Dylan Hulser, added, “My klout score looks like the stock market. loses out, only to rebound in after hours tweeting,” he tweeted.

Klout measures “influence on networks based on your ability to drive action” according to Megan Berry, a marketing manager at Klout. The site does not look at activity level, she explained, but rather what your account’s audience likes, reshares and comments.

The Twitter community is also tweeting suggestions to Klout on how to become more useful. Hollywood Slinky suggested that Klout improve “Topics” by having users “write in topics of influence to +K people for. The algorithm is often wrong, or very lagging behind current conversation.”

Klout CEO Joe Fernandez shot back at the critics in an email to the Daily Dot.

“We believe an individual’s ability to activate their network behind whatever message they are trying to spread is hugely important,” Fernandez wrote. “It’s really early in this process but we are in it for the long haul and while we listen to feedback we don’t let it discourage us from our mission.”

Full disclosure: the Daily Dot is a marketing business partner of Klout.