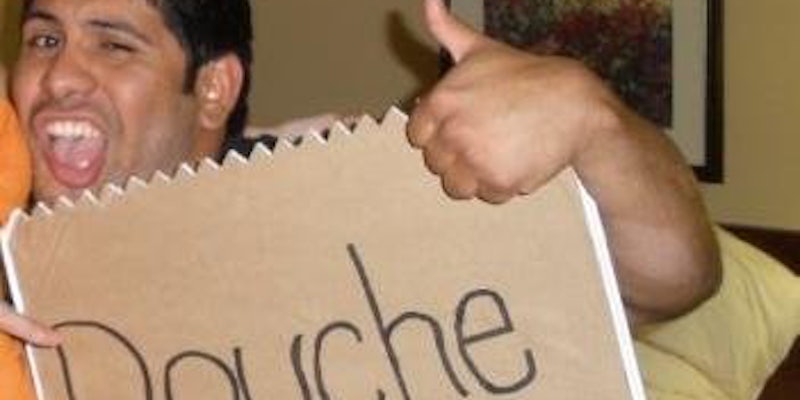 If Klout is a social media analytics tool that calculates a person’s Twitter influence, Klouchebag is its bro-friendly counterpart—a douchey clone that measure a user’s asshattery.

Klouchebag is the brainchild of 27-year-old programmer Tom Scott, who created the Klout-inspired site Thursday after reading the Wired article “What Your Klout Score Really Means.”

“I’d been annoyed with the idea of Klout for a while, and that crystallised it. Today, I registered the domain name (sadly, “klunt.com” was already taken) and built it in a couple of hours of spare time. It launched less than an hour ago,” Scott told the Daily Dot Friday morning.

“Klout annoys me for the same reason that search engine optimization annoys me: It’s an enormous amount of effort designed to game an arbitrary and often-changing system. Imagine if all that time went into actually making interesting things, or caring about the people around you.”

“I asked people about things that annoy them on Twitter,” Scott said. “Retweets themselves don’t – but too many, none at all, or old-style retweets were all bugbears. Also, ’please RT’ is a major bugbear.”

Founded in 2009, Klout was designed to allow people to arbitrarily gauge their influence on Twitter and other social media sites. Over the years the site has received a lot of blowback for its methodology. Last November, CNN writer John Scalzi called the site “sad” and “possibly evil.”

But what separates a power user from a douchebag?

Scott admits that a person’s Klouchebag score isn’t very accurate or scientific, nor does it match up with those from Klout.

“I don’t control the algorithm!” he joked on Twitter. “Well, I do, but it’s not like I put much effort into it.”

What will Klouchebag reveal about you?