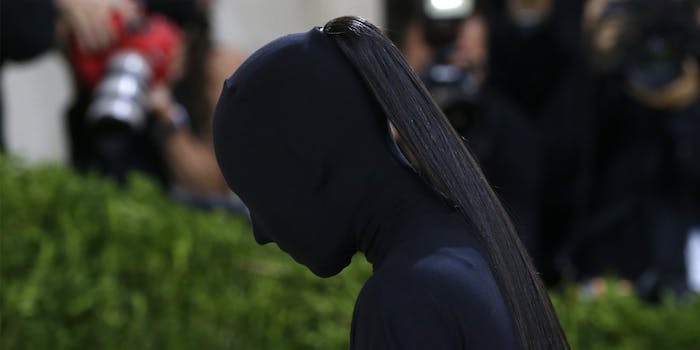 She's covered in black from head to toe—and people are making plenty of comparisons.

No matter the theme, the annual Met Gala is all about dramatics. But Kim Kardashian, whose looks have often stolen the show, upped those stakes (and became an instant meme) without showing her face at all.

Kardashian arrived on the Met Gala red carpet Monday night in an all-black ensemble that instantly turned heads. Her interpretation of the night’s theme—“In America: A Lexicon of Fashion”—included a gown designed by Balenciaga, black heels, black stockings, black gloves, and a black mask that covered her entire neck and head except for a small part at the top where a ponytail could be pulled through. She was accompanied by someone dressed similarly to her. People speculated it was Kanye West, but it was actually Balenciaga designer Demna Gvasalia.

In a night where color was vibrant, Kardashian stood out. And it didn’t take long for people to compare her outfit to other hooded figures in pop culture.

Plenty of people made comparisons between her outfit and Dementors, the hooded creatures in the Harry Potter series that guard the Wizarding prison Azkaban, feeds off people’s memories, and have the ability to suck out someone’s soul.

Someone even Photoshopped her at Hogwarts.

Many people were reminded of video games, whether it was a locked outfit, a character dressed in black, or the Grim Reaper himself.

There were nods to other iconic all-black haute couture, the demons that haunt us, Tom and Jerry, and an imagining of what Kardashian might see from inside the black mask.

And when Kardashian was photographed next to her sister Kendall Jenner, who was wearing a pink gown and a face mask, the memes took things to another level.

But after the Met Gala? Well, all bets are off.