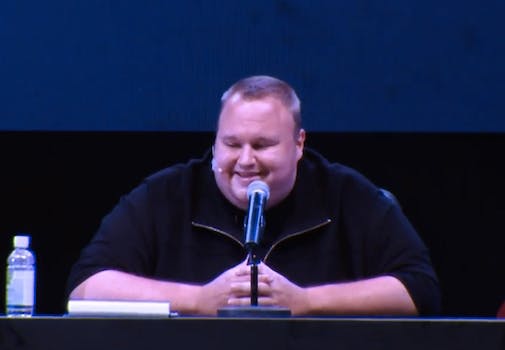 Dotcom says GEMA eighty-sixed his video from YouTube, and he's threatening legal action. GEMA says it did nothing of the sort.

Another day, another controversy for Kim Dotcom and his controversial new file locker site, Mega.

This time, it’s an apparent bogus copyright claim on a promotional YouTube video. Only it’s unclear what’s bogus: The contents of the claim, or whether the video was ever taken down in the first place.

Dotcom announced on Twitter Wednesday that his launch video, an hour-long celebration that includes live music, was briefly taken offline though a copyright claim filed by GEMA, a state-controlled German music royalties agency.

“Incredible: The GEMA in Germany took down our #Mega launch press conference video from Youtube for copyright claims,” Dotcom tweeted. “I filed a counter claim with Youtube and the video is back online. GEMA can expect mail from our legal team. Copyright madness.”

In 2011, Dotcom’s music video “The Mega Song,” which featured major recording artists like Snoop Dogg, Alicia Keys, and Kanye West, was infamously taken down via a copyright claim from Universal Music Group.

As of Thursday, the launch video appears to be available on YouTube.

GEMA, however, insists it did no such thing.

A representative for Mega told the Daily Dot the video was indeed briefly taken down, and that YouTube clearly implicated GEMA, which may be an error on YouTube’s part:

“We wouldn’t know who else would have done that to be frank,” he said. “In Germany when you tried to watch the video it temporary said:

[This video is not available in Germany because it may contain music for which GEMA has not granted the necessary music rights].

So GEMA was our first clue.”