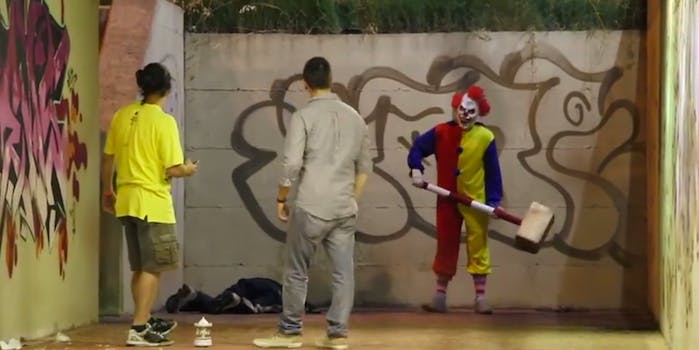 The killer clown prank is back—and scarier than ever

If he's this bad, imagine the circus he came from.

Last month we introduced you to the Internet’s scariest prank, in which pedestrians ran afoul of a terrifying, murderous clown. Well, the carnivalesque creep is back in a sequel from DM Pranks, and he’s using every tool at his disposal—from unsettling music boxes to (bladeless) chainsaws—to make his victims think they’ve landed in a real-life horror flick.

The hardest part of shooting these must be sprinting after people to tell them it’s all a joke.

No comment as yet from clown special interest groups, who have been fighting this “maniacally laughing psycho” stereotype for decades. Remember: If you do happen to encounter a clown, there’s only a 50-50 chance it wants to dismember and eat you.